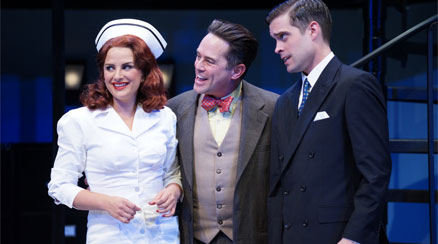 ZACH Theatre made the smart choice to celebrate its 80th birthday with Mary Chase’s classic, Harvey, on its brand new, beautifully designed Topfer stage. Harvey is a timeless work that should be standard medication for anyone preoccupied with the frustrations of our age. Walking out of the theater, it was impossible not to slow my pace, smile a lot, and obey the often forgotten social grace of opening the door for people.

For those uninitiated into the cult of Harvey, it is the story of Elwood P. Dowd, an incredibly caring and tender individual, whose only flaw is the fact that his best friend is a 6 foot 3.5 inch tall rabbit named Harvey. Dowd’s neurotic family attempts to admit him into a mental institution, and hilarity ensues revealing their own mental instabilities.

Martin Burke played an impeccable Elwood in that his attention to the invisible Harvey was so consistent that the rabbit’s size on stage was implicitly apparent. Elwood and Harvey maintained a continual friendly chatter, muttering to each other about inside jokes whose content we will never know; however, the buzz of friendly quips and gestures created a very realistic onstage friendship that is very difficult to do when one friend is invisible.

Lauren Lane’s Veta Louise, Elwood’s foil, never let the farcical nature of the play dictate her character choices. Instead of falling prey to stereotypes, Lane claimed Veta Louise through very dynamic vocal control. She wasn’t afraid to speak softly in what can be otherwise considered a loud play. The same could not be said for Erin Barlow (Myrtle Mae Simmons) and Victor Steele (Duane Wilson), who shouted for the entirety of the performance.

Technically, Dave Steakley’s Harvey is slick production. The transition from interior parlor to mental hospital was seamless, thanks to a rotating stage. The rabbit paintings, only visible during scene transitions, elicited a few chuckles during scene changes and kept the audience engaged during what would otherwise be a dull moment.

Scenic designer Michelle Ney contrasted the stuffy, gilded home with the stylized, clinical mental hospital. The wall of mostly unreachable clip boards contributed a looming tone of absurdity into what is otherwise an orderly, sterile environment. Lighting designer Matthew Webb strategically manipulated the ambiance to punctuate moments of emotional intensity, yet, at times, the soft light on  Elwood coupled with blue on everything else technique became formulaic. 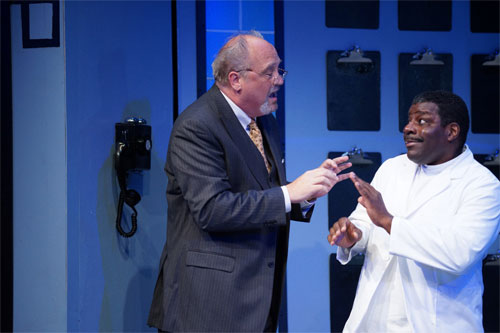 Steakley made a well calculated decision to bring Harvey to new Topfer Theatre. Underneath its feel-good Frank Capra exterior, Harvey subtly interrogates our notions of sanity and social relations.  Chase uses humor to lower our guard, making us more receptive to Harvey’s big question: If Elwood isn’t responsible for his insanity, then who is?

–PHILLIP JOHN
Phillip John is an Austin-based writer and musician.