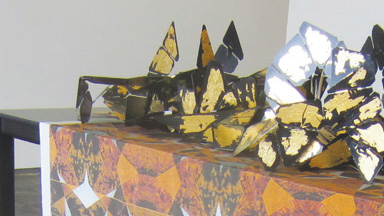 J.M.W. Turner, Caspar David Friedrich and the Hudson River School understandably come up a lot in discussions of former Museum of Fine Arts, Houston Core Fellow Hilary Wilder’s work. Visiting her current exhibition at Devin Borden Gallery, I thought of James Abbott McNeill Whistler, a 19th-century painter.  It wasn’t  because of how he painted landscapes and seascapes – though I’m a huge fan – but because of something he said in The Ten O’Clock Lecture that resonates with the contradictions of landscape depiction dramatized in her paintings, drawings, sculptures, and installations.

“That Nature is always right, is an assertion, artistically, as untrue, as it is one whose truth is universally taken for granted,” Whistler said.  “Nature is very rarely right, to such an extent even, that it might almost be said that Nature is usually wrong – that is to say – the condition of things that shall bring about the perfection of harmony worthy a picture, is rare, and not common at all.”

Nature gets it wrong a lot in Wilder’s responses to recent residencies in Iceland and Ireland, the landscapes, histories, and legends of which inform the new work.

The eruption in The Geyser (Strokkur’s Big Day) is contained in hard-edge geometric shapes that are at odds, not just with the geyser’s fury, but Wilder’s kitschy way of painting it. A Turner-esque sea is reduced to a souvenir image in the mise-en-scène painting Commemorative Table Top (The Cod Wars), in which the table top is set against the patterns of a linoleum floor and rug. (The so-called “Cod Wars” were a series of bloodless confrontations between the United Kingdom and Iceland over fisheries rights, with the Icelandic Coast Guard performing such heroic exploits as cutting British fishermen’s nets.)

Elsewhere, shards of light are juxtaposed with crisp geometric fragments resembling wood veneer in brilliantly executed works on Yupo, a synthetic waterproof paper. Their patterns get transposed to a custom-printed silk crêpe de Chine, which Wilder drapes, waterfall like, across a table with an angular PVC sculpture whose planes are part spray-painted and part gold-leafed in The Viking’s Skiff.

Veneer shows up again on a grid that superimposed over a sky in the wall painting View and in the wall-mounted sculpture Raft. Its planks are barely held together with twine, as if it had come apart on one of the turbulent seas Wilder depicts, yet their veneer surface looks straight out of a furniture store. The competing impulses for nature’s grandeur and human order are at loggerheads – all the more tragicomically so when you realize these “logs” are made of Yupo paper too.