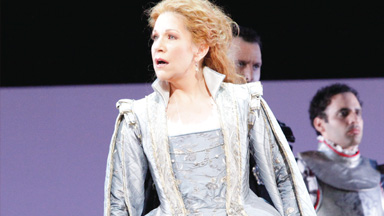 The tragedy of Geatano Donizetti’s Mary Stuart, link which had its Houston Grand Opera premiere last month, pills is that there’s so much drama, intrigue and passion in the real story behind rival queens Elizabeth I of England and Mary, Queen of Scots, you can’t help but wish the composer had relied upon the history. Instead, the opera is a tale of hell having no fury like a woman scorned, and gives us an Elizabeth, who executes her cousin Mary because Mary is in love with Elizabeth’s own favorite, Robert, Earl of Leicester.

None of this true, nor is it Houston Grand Opera’s fault. For that, we’ll blame Donizetti himself for fabricating it off of a play written in the same era by Friedrich Shiller. And yes, this is also opera, not the History Channel.

So the bad news is, if you can’t suspend your disbelief over the happenings on stage, it will be a very long evening. The good news is that the performances and the music are quite wonderful.

Joyce DiDonato sings Mary, the doomed Scottish queen, with dignity and pathos.  Act I’s O Nube, in which she laments being a prisoner and longs to be free as a cloud, is longingly and  lovingly rendered.  Act II’s De te di un umile preghiera, her final prayer, showcases DiDonato’s powerful and emotional range.  She effortlessly captures Mary’s proud dignity, and it’s awesome to see.

Tenor Eric Cutler brings empathy to Robert, Earl of Leicester, alternately pleading for mercy on behalf of Mary and offering comfort to the exiled queen. And Oren Gradus’s bass is perfectly crafted for Cecil, Elizabeth’s most trusted advisor, as he pushes the queen to order the death of her rival.

Patrick Summers leads the orchestra through Donizetti’s score, and his deft handling gives us music that rises up in argument and indignation, and falls to the softness of a lullaby. Donizetti’s score captures the very real drama of the age in a way the libretto does not, and Summers uses this to full effect.

Set and costume designers Neil Patel and Jessica Jahn make their HGO debuts, and their dark, rich colors with shimmers of reds and golds convey the opulence of 16th century England.

As history, Mary Stuart doesn’t quite hold up, but as opera, it more than passes the test.

–Holly Beretto
Holly Beretto writes about the arts, food and wine, and interesting people for a variety of local and regional publications. She fell in love with the story of Mary Stuart and Elizabeth I in the Henry Barnard School library when she was nine and is fascinated with them still.