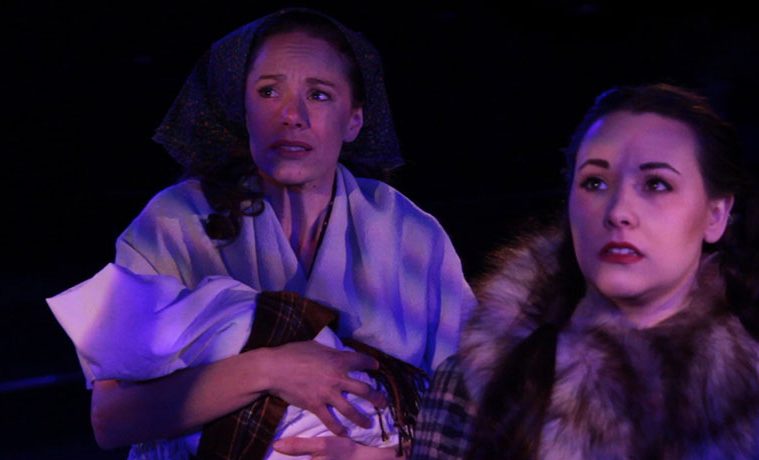 Review: Into the Woods

IMAGE ABOVE: Crystal O’Brien as Cinderella and Kasi Hollowell as Little Red in Main Street Theater’s production of Into the Woods. Photo by RicOrnelProductions.com 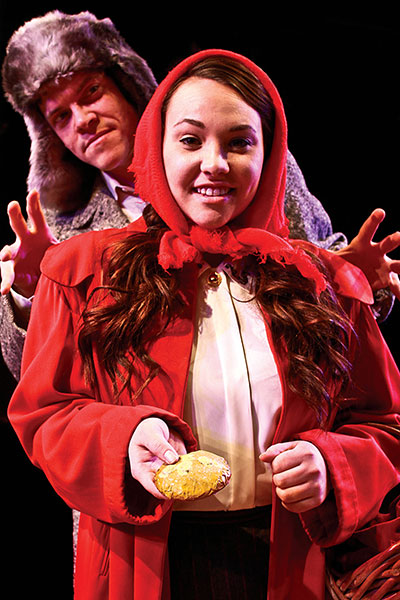 Kregg Alan Dailey and Kasi Hollowell in Main Street Theater’s production of Into The Woods.
Photo by RicOrnelProductions.com.

It’s no small thing to tackle the intricate world of Stephen Sondheim; with endless layers and meanings, his razor-sharp writing and complex composition have proven daunting to performers everywhere, with bigger budgets, bigger spaces and bigger casts than Main Street Theater. So, what a delight that MST not only tackled Sondheim’s gloriously goofy and sometimes grim Into the Woods, but did so with superb style and aplomb.

The 1988 Tony Award-winner for Best Original Score and Best Book of a Musical is a magical mish-mash of familiar fairy tales tossed on their ears. The book of the show by James Lapine tells the tale of a baker and his wife, who have been cursed by a witch, who herself has been cursed with old age and ugliness. The couple will remain childless unless they bring the witch four distinct items she needs to create a potion to restore her youth and loveliness. Into the woods they go to find these seemingly random things, and into the mix come Little Red Riding Hood, seeking her grandmother; Cinderella, heading to the king’s festival to dance before the prince; and Jack, who goes through the woods to sell his beloved, non-producing cow. As their stories collide like bumper cars, what results isn’t a tale of happily-ever-after, but a story of what happens when you actually get happily-ever-after.

The whole of Act I is dedicated to the challenges of rushing after that which your heart most desires; by Act II, everyone’s discovered that the adage of “be careful what you wish for” is worth heeding. And laced through it all is a bouncy score with undertones of pathos and contemplation. 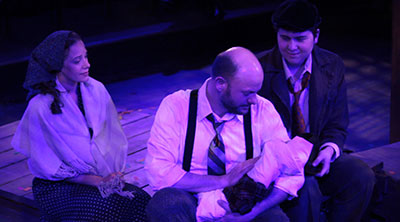 Crystal O’Brien as Cinderella, David Wald as The Baker and Marco Camacho as Jack in Main Street Theater’s production of Into the Woods.
Photo by RicOrnelProductions.com

Many in the cast of 13 take on multiple roles, their changing personas whimsically achieved by costumer Macy Lyne, adding a scarf here or a hat there. Among the standouts are Crystal O’Brien, who brings a shimmering voice and ingénue spirit to Cinderella, and her singing in the second act ballad, “No One is Alone,” was particularly beautiful. Marcos Camacho as Jack needed a little time to settle into his voice, but by the time he got to “Giants in the Sky,” midway through Act I, he’d proven he’s got a fine vocal instrument and a wealth of boyish charm just perfect for the hapless Jack, a kid on his way to becoming a man. David Wald plays the Baker with charming exasperation over the idea that his wife (the capable and clear-voiced Amanda Passanate) should help him in this quest, and does some of his best work when the consequences of wishing come home to roost. Kregg Dailey Wolf’s Prince is rakish fun, amusingly “charming, not sincere.” “Agony,” his duet with Rapunzel’s Prince (Scott Gibbs who, by the way, nearly steals the show in his turn as Milky White, the cow) is a soaring send-up of the tragedies of put-upon fairy tale princes, lamenting how they are, among other things, “always 10 steps behind, always 10 steps below” their intended princesses, is fantastic. 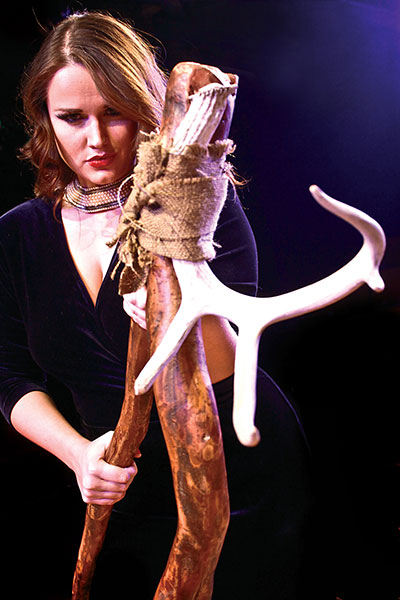 Christina Stroup as The Witch in Main Street Theater’s production of Into The Woods.
Photo by RicOrnelProductions.com.

In many ways, though, the show belongs to The Witch, the catalyst who set the whole madcap adventure moving. Stepping into a role originated by Bernadette Peters and making it marvelously her own is Christina Stroup, who cackles, cringes and is otherwise cantankerous with endless abandon. From the rat-a-tat cadence of her Act I description of the exploits of the Baker’s father ravaging her garden to the lush and lyric “Children Will Listen” in Act II, she casts a powerful and energetic spell all evening long.

She and the rest of the cast prance, skip, skulk and meander across Ryan McGettigan’s bare wooden-block set, a perfect blank canvas for their Technicolor performances, with the action narrated by members of the cast and by Rutherford Craven, serving as both the evening’s Narrator and a Mysterious Man who coaches and creates conflict. They are guided along by Claudia Dyle’s adept musical direction, and the solo piano pushing the score along provides warmth and charm.

Director Andrew Ruthven chose to set the story not in some magical, far-off kingdom but on an everyman home front of 1944. The conceit is introduced to us before the main action starts, as the characters gather around a radio to listen to a broadcast of bombs falling in Trafalgar Square, but without more ties to that time period, it doesn’t quite work. No real matter, though, for he guides the cast with a deft hand, and brings an intimacy to the story that’s so acute, you often feel less like a kid listening to a fairy story than a voyeur looking into the hearts of the characters. Ruthven’s sureness is complemented by Lyne’s terrific costumes and John Smetak’s lighting, which brings us from the warmth of cozy cottages to the shadowy woods and back.

By bringing together the darkness and light in these beloved tales, Into the Woods proves why you should always ask yourself if “you are certain what you wish is what you want.” And if what you want is to see Main Street Theater showcasing its continued presence as a force to be reckoned with on Houston’s small-stage scene, then Into the Woods is all you could wish for—and more.

Into the Woods
Main Street Theater
Through Feb. 16