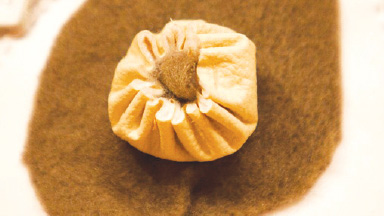 Sports occupies a prominent place in American popular consciousness in general, medical and Texans in particular bear an extreme enthusiasm for the game. In the wake of the college football championships, and with Superbowl XLVI around the corner, sports seem to be on almost everyone’s minds. Though athletics and art don’t often intersect (in some ways they seem diametrically opposed), comparisons can be made between the two worlds. Both are concerned with spectatorship; both operate within distinct rules of play; both are competitive; and both have their own players — some who gain MVP status, while others remain on the sidelines, waiting for their lucky break.

As the exhibition title, “Contact,” implies, Jade Walker’s current installation in the large John O’Quinn gallery space at Lawndale Art Center is suggestive of a contact sport. Like her earlier work, the objects assembled in “Contact” convey Walker’s interest in social constructions of gender and the inevitable deterioration of the human body over time. Walker’s most recent artistic corpus pushes these considerations further, addressing trauma inflicted on the body through sports. Occupying center stage of the exhibition is Walker’s “Spectator Sport” (2012). In this towering sculptural installation, a set of bleachers like one might see at a little league ballpark acts as an oversized pedestal. On the bleachers, which are covered with a beige pink fabric skin (issues regarding race seem less of a concern in Walker’s work than those of gender), sit 49 individual soft sculptures, made of unusual materials and found objects such as fur, rubber, medical supplies, and sports gear.

Likewise, the materials that Walker uses are extensions of or surrogates for the body, such as jock straps, crutches, hot water bottles, barbells, and what appear to be silicone breasts. However, rather than portraying strength, endurance, and athleticism, Walker’s droopy forms express exhaustion and the fragility of the body. The fabric and thread holding the sculptures together evoke bandages and sutures, treating open wounds.

Playful and disturbing, Walker’s engaging exhibition about sex, sports, science, and spectatorship leaves visitors contemplating who is in the game, who is relegated to the bench, and what injuries are yet to be sustained.

— KATIA ZAVISTOVSKI
Katia Zavistovski is a PhD student at Rice University, and the Menil Curatorial Fellow at the Menil Collection, Houston.