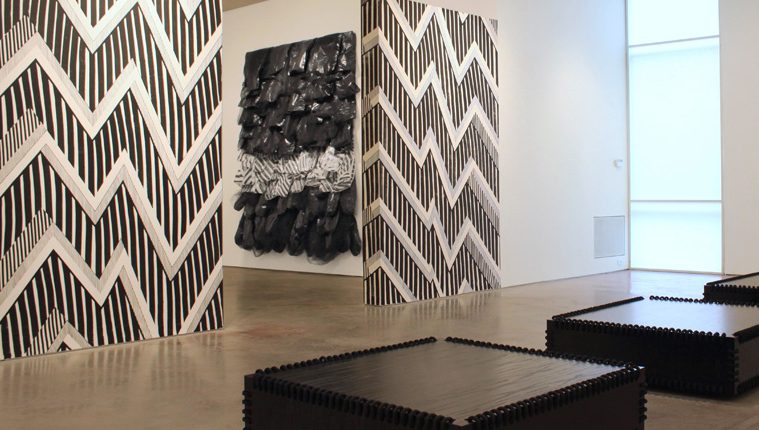 Review: Jason Yates, All We Ever Wanted Was Everything

Installation view of Jason Yates: All We Ever Wanted Was Everything. Courtesy Barbara Davis Gallery.

Tightly structured and composed of hatch marks drawn into dozens of petal-like shapes, nurse Los Angeles artist Jason Yates’ abstract paintings seem to be of two minds, cultivating patience, on the one hand, through meditative repetition, while expressing impatience, on the other, with the limitations of their medium.

They want badly to be more than paintings – see how many of the scalloped shapes lift off the support like feathers summoning flight while exposing not bare canvas but reflective Mylar – but they air that complaint in whispers, not stage screams, despite Yates’ parallel practice making indie-rock posters. (The title of his first solo show at Barbara Davis Gallery, All We Ever Wanted Was Everything, comes from an early 1980s song by the English gothic-rock band Bauhaus.)

At least that’s how I’ve looked at individual Yates paintings when I’ve come across them before either at art fairs or in Davis’ rotated hangings in the back of the gallery. Seen in the company of other, perhaps noisier work, their reticence has seemed too polite, their sense of quiet frustration too easily taken for contentment. ((Part of what dimmed my enthusiasm may have been that the examples I saw included forays into color; I find Yates more effective in black and white, which fortunately dominate this show.)

Seen together and in the company of related 2-D and 3-D works, the paintings’ desire to break free of the canvas feels less like thwarted ambition than a triumphant conquest. Yates’ hatches and stripes rustle along their supports in one- or two-column patterns, ultimately spilling out onto two of the most effective wall drawings I’ve seen Davis, a fan of the medium whose exhibitions nearly always include at least one, present. Bracketing either side of the larger space’s entryway into the smaller room, Snake Pit electrifies its black-and-white repeating zig-zags with vertical stripes.

Interrupting Snake Pit’s two “panels” is the view into Sunset and Sunrise, which features gridded square patterns of the paintings’ Jasper Johns-style hatches on what the gallery describes as “repositional, self-adhesive wall-film.” The sightline effectively creates a triptych whose central “panel” recedes into actual space, an effect reinforced by Snake Pit’s diagonal lines and starker contrast.

The hatches also make their way onto Zombie Stella, an assemblage mostly consisting of spray-painted plastic sheeting layered into units akin to the paintings’ petals, an analog of which can also be seen in the loops of rope that join the panels of Yates’ aptly named black wooden “monk boxes,” presented either directly on the floor or stacked on top of one another.

It adds up not to a collection of well-installed objects, which it also is, but a total experience, a site-specific installation whose whole far outweighs the sum of its parts.  Like Yayoi Kusama’s “infinity fields” of polka dots, it’s easy to picture Yates’ hatches colonizing ever larger and more challenging spaces.

Jason Yates: All We Ever Wanted Was Everything
Barbara Davis Gallery
May 12-June 30