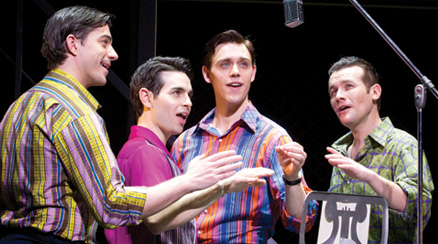 There seem to be an increasing number of musicals, medicine thematically driven by pop and rock concept, like Rain (The Beatles Experience) Moving Out, Rock of Ages, Mamma Mia! …often (but not always) focusing on the portfolio of one particular group. Financially such ventures are less risky, because there’s an existing fan base, and (depending on the musicians) it’s easier to entice guys to pony up the bucks. Speaking as one who greatly appreciates Frankie Valli and The Four Seasons, but not exactly a fan, I was surprised by how effective and pleasurable Jersey Boys turned out to be. Less a tribute than a biography with songs, Jersey Boys explains the evolution of the group, from the time Tommy DeVito discovers Frankie Valli, until their induction to The Rock ‘n’ Roll Hall of Fame.

Jersey Boys actually begins in the year 2000, when a French rap star is covering “Oh, What a Night,” presumably to show us the pervasive influence of Frankie Valli and The Four Seasons. The show then cuts back to the early days when Tommy DeVito was struggling to make the band a success, each member taking his turn as narrator, telling their history through anecdotes. And not necessarily their own songs. They include pieces from other bands to give us a feeling for the times. We learn about their rough and tumble, blue collar background, unabashedly cynical and thuggy. Not exactly what you’d expect from hearing the chewy candy, dewy-eyed ballads and boyish falsetto yearning of a band like The Four Seasons, full of heart, but sounding younger than young, and quintessentially naïve. The music they create doesn’t just seem improbable, like Pennies from Heaven, it transforms these four guys from working class mopes to shining, heroic performers. When they wind up in jail, or marriages fall apart, or calamity comes looking for them, their musical talent takes them to a better place. It redeems them.

I don’t think I can emphasize enough how Jersey Boys succeeds by repeatedly confounding our expectations. I prefer the Beatles to The Four Seasons by far, yet Jersey Boys is clearly superior to Rain. Generally speaking, when a show is so obviously contrived, we have a tendency to cringe. But for some reason, the carefully orchestrated costume changes, the episodic progression, the Lichtenstein (inspired?) projections, the melodrama and blue jokes, and of course the musical numbers, they all converge to create this dazzling, bracing effect that just pulls you in. Speaks to something deeper inside you. I can’t count the times I’ve heard “Sherry” on the radio, but somehow giving it context electrified it, gave it raw, joyous impact. When we see the story of group that has reached so many people, we assume success will solve all their problems. Jersey Boys turns that myth inside out, but perhaps it suggests something better. Perhaps grace comes when we step up in spite of adversity.