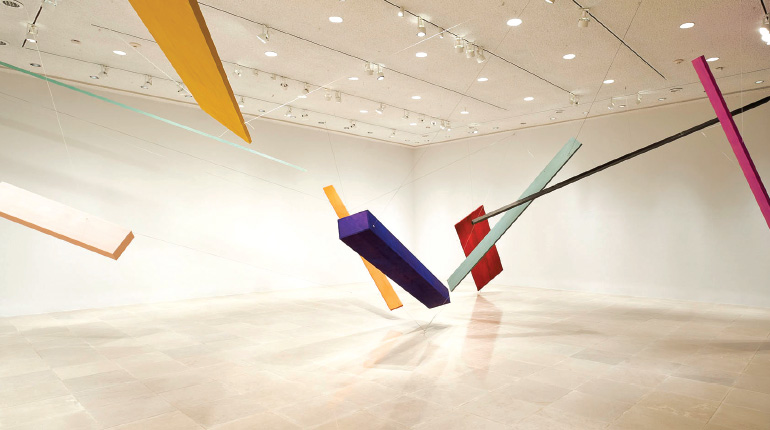 Installation art can mean many things. Often it suggests the contiguity and continuity of stuff, the interconnection of materials and objects, found and made, in three-dimensional space. Boxy, craggy, scattered and thrown, installation art is space making par excellence. It is like architecture and sculpture, but it is neither one nor the other.

Bearing upon these qualities, Joel Shapiro’s “New Installation” offers a contradiction in terms. The Rice Gallery installation is spatial, its totality falling somewhere between architecture, sculpture and painting for that matter. One thing it is not, however, is contiguous. Bound, hung and strung-out across wires, its painted spruce components float in space defying the laws of gravity. In different lengths, shapes, sizes and colors, they seem to be blasted bits floating in an outer-space ether.

An evergreen plank hangs mid-room, seemingly floating in one direction as another in bright Pepto-Bismol pink almost cuts across its way. Opposite these two, a navy blue and tan plank almost meet at the floor, where wires strung from them connect at the same small anchor embedded in the floor. Like minimalist space trash, a wide, dark red door-shaped piece of wood hangs taut, not quite touching the floor and far from the ceiling above.

Contiguity is absent here because this is not installation art; rather, as Shapiro is a consummate sculptor, this is sculpture — in disaggregated form. Instead of the weightiness of floor-bound, socle- topping classical works of sculpture — think here the “Boxer of Quirinal” (330 BCE) or Rodin’s “The Thinker” (1902) — this is sculpture that is seemingly weightless: sculpture for the age of information and digital bits. Shapiro extrudes the flows of nanotechnology into three-dimensional form. That they are built out of wood and then painted reconnects us, however, to the realm of sculpture.

With painting atop minimalist box, we might think of the work of Anne Truitt, a sculptor of the 1960s who Clement Greenberg famously described as the “Changer” for her use of paint on sculpture. Greenberg praised Truitt for moving away from the steel surfaces and “theatricality” of the predominantly male minimalism of Serra, Judd and Andre. While for Greenberg, Truitt’s painting of geometrical forms made them better, more feminine than the masculine work of male minimalists, Shapiro’s painting of wooden geometries has little to do with gender and more with de-gendering. The stuff of tension and compression, the colliding forms in space that are Shapiro’s “New Installation” are constructions of wood that visually suggest blasted bits of stuff — garbage in outer space or information floating somewhere above your head. They are material while suggestive of the immaterial.

— CHARISSA N. TERRANOVA
Based in Dallas, Charissa Terranova is a freelance critic and curator working globally.