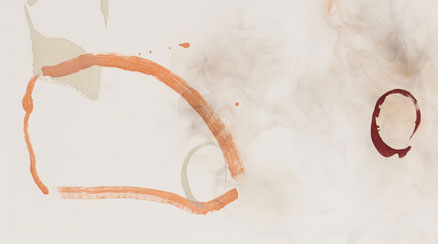 It goes without saying that John Cage’s reputation as one of the 20th century’s most influential and innovative composers precedes him when it comes to his visual work. And though there’s not the room in this review to speak of how one informs the other, it is worth noting that the two arise out of a shared process.

Cage’s interest in indeterminacy and in chance operations inspired by the I Ching, which governed many of his best-known musical scores, have similar reign over his prints and drawings. While the comprise only a small sample of the artist’s output, the six works collected in Hiram Butler Gallery’s current exhibition span two and a half decades of the life of Cage, who died in 1992. (Along with works on paper, the show includes a music box said to be incapable of playing the same randomly generated composition twice.)

Aesthetically, Cage’s works call to mind his association with abstract expressionists and, in his first lithographs from 1969, his close friend Robert Rauschenberg. The lithographs, titled Not Wanting to Say Anything About Marcel (A+B), memorialize Duchamp’s death the previous year, using a visual style and printing technique borrowed from Rauschenberg.

While the visual similarities of the work with his contemporaries might give the impression that Cage is following (and fitting into) the fine art world rather than innovating, the stories behind their creations tell their own story and help to enliven their appeal.

With the lithographs, he used the I Ching to determine the placement and fragmentation of his source images and text (an encyclopedia). For several series later in his life, represented in the exhibit by a drawing from 1988 and an etching from 1989, Cage used the traced outlines of stones as his source, similarly using indeterminacy as the functional mechanism of spatial organization, color choice, pencil hardness, and brush size. Residue of smoke and singeing on the paper adds individual qualities to two of the works on display.

Medicine Drawing #8 (1991) removes the artist’s hand even further, reducing Cage’s level of choice to the selection of herbs thrown into a batch of pulp before he pressed them into paper. The result is the most immediately readable work in the collection, betraying his creative process in its sheer simplicity.

In contrast, other pieces did not truly come alive until after I had watched videos online of Cage and his team of expert printers rolling wads of ecstatically flaming paper through an etching press. Seeing the makeshift grids of stones and the pigments to which he limited a work returned to the gallery images a sense of revelry and of activity that is often muted in the stillness of the prints. To strain a comparison: Even if the piano player is not playing, there is something to seeing him sitting there.

—DAVID A. FEIL
David A. Feil is a writer and educator in Houston.