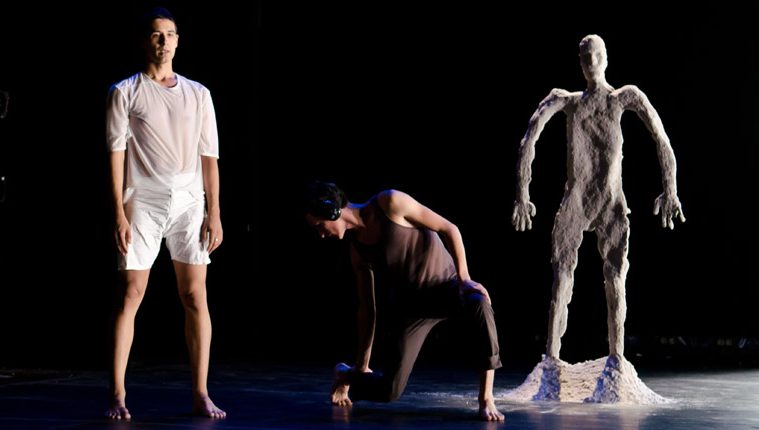 If I had to label the genre of Jonah Bokaer’s new work, Curtain, premiered at Jacob’s Pillow Dance Festival, I would say it’s a thriller, more in genre of Inception than any garden variety car chaser.

Performed by Bokaer and his frequent collaborators, Adam H. Weinert and James McGinn. Curtain is really a cluster of three works (Curtain, Sage Phase and Les Innocents) that neatly fuse into one experience.

Originally billed as a collaboration between David Hallberg and Bokaer, the evening was reconfigured after Hallberg’s injury. There’s an essence of emergency in the piece, its elements feel freshly combined, still volatile and possibly explosive. And what a bunch of elements, from a pile of sand with Bokaer’s body imprint, statues made from the plaster and sand, and a fountain of Non-Newtonian substance, dreamed up by collaborator and visual artist Daniel Arsham. I’m pretty sure that something like this gooey gook was used in a scene from Man from Uncle. In this scenario, I imagine all of us and everything else is made from this stuff. Nothing is more eerie than watching the constant flow of this substance as it doubles in on itself, forming and reconfiguring, slowing creeping into an expanding puddle. It’s like the mutant dancer.

In fact, a feeling of menace pervades much of Curtain. From Bokaer’s opening stillness guarding the proceedings, to his whacking his sand/plaster likeness into smithereens, mystery rules this roost.

Bokaer is a master of stillness. He doesn’t just stand still, but holds a space whole. His clean lines and exact dancing make for a ripe tension. I never know what will happen next. There’s even a disappearing act, when Bokaer leans back to fall off the edge of the back at the stage early on in the piece. Yet, all this austerity is not without a touch of wit, especially when the goo runs out with a giant plop, feeling like a well calculated wink.

Curtain also contains a fixation on doubles, of negative and positive space, of impression, the play between the mold and its contents.  The unknowns pile up as time moves on. To thicken the plot, Weinert and McGinn appear wearing headphones. What are they listening to? What happens when we run out of goo? Questions of the nature of body and matter surface. Bokaer is somewhat of a materials wonk. Last year at the Pillow, he shared the space with ping pong balls and a large sheet of paper.

The drama is ramped up by Chris Garneau’s ambient score, which contains a sampling of John Cage’s lecture to the students at Jacob’s Pillow. It’s a gentle nod considering Bokaer’s linage to Merce Cunningham Company, where he danced for several years early in his career.

Clearly, I’m reading into Curtain. Why not? As with most of Bokaer’s work, there is an open invitation to do what you will with what you see. Bokaer is less interested in galvanizing our attention with a set of “look here” instructions than creating a larger environment for us to stretch our attention, to follow many possible visual and kinetic roads. His work functions more like an installation, and, although you maybe stationary in a theater seat,  a wandering perceptive freedom is present for the adventurous viewer. You don’t so much as watch Bokaer’s work  as you do decipher it, that is, if you are game.