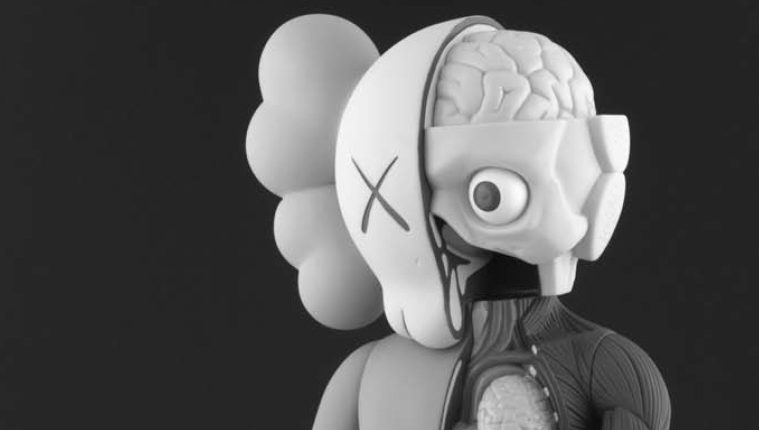 The Modern gained a little street cred with the arrival of a Focus exhibition from Brooklyn-based artist KAWS (aka Brian Donnelly). KAWS, once a graffiti artist, has enjoyed tremendous success in both commercial and fine art worlds. The young artist has worked with Kanye West, designed limited edition Dos Equis bottles, and opened an art toy boutique in Tokyo. KAWS boasts a long list of commercial successes which in no way detract from the impact of his works in the gallery.

Visitors to the KAWS exhibition will quickly recognize the artist’s influences. Both the paintings and the sculptures on view are unmistakably representations of cartoon characters. Elements of Mickey Mouse and Sponge Bob Squarepants appear here and there, as if to provoke a copyright lawsuit. The cartoon forms are accessible and friendly but are often balanced with odd cropping or compositional choices that create the unusual out of the usual. KAWS has distorted and co-opted these bulging eyes and overly-expressive mouths of the cartoon world and manipulated their expressive and symbolic power to make work that is as familiar as it is strange.

At the entrance to the exhibition stands “Companion (ORIGINALFAKE)”, a ten foot fiberglass character with a skull face. The character is bisected, revealing its smoothly sculpted muscles, digestive system, brain, and amputated bone. “Companion” is an uncomfortable yet intriguing combination. The left side of the figure is dissected, indicating death, while the right side still happily sports its Mickey Mouse pants. In the sculpture “Accomplice” a skull figure wears a bunny suit but bears the X-ed out eyes that are so frequent in KAWS’ works. These sculptures may have features that are uncomfortable, but their smooth cartoon-like qualities make them strangely adorable.

KAWS’ work “Where the End Starts” reads like a color field painting dissolved into cartoon madness. Bars of seemingly random color take on dimension as floating planks; simple shapes possess mouths and expressions. Throughout KAWS’ paintings we see mouths crying, hands reaching, and eyes squinting. His work “Black Spots” may as well be a list of comic emotions as shown through X-ed out eyes. In the cartoon vocabulary, X-ed out eyes most often means death, but KAWS’ characters are full of energy and push at the edges of the canvas that contains them. In a way, KAWS has used these childhood figures to animate death.