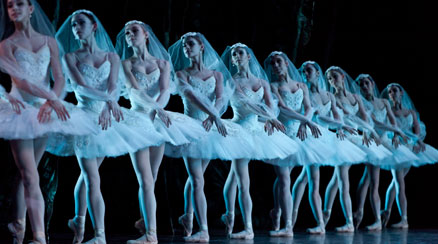 If it be true that “ballet thy name is woman” (so says Balanchine), then in Houston her name is Karina Gonzalez, a dancer of such extraordinary power  that she assumes the center of any stage where she finds herself. So, it made perfect sense for her to be the on cover of Dance Magazine in my November 2012 story: She is the company’s brightest star. I knew that then, and those who attended Houston Ballet’s lavish production of La Bayadère know that now.

Houston Ballet’s newest principal has joined a lineage of ballerinas to play Nikiya in La Bayadère and in doing so, gives this ancient ballet relevance today. Gonzalez so absorbs the role, we are transported to this mythic land of our imagination. The Venezuelan ballerina has the power to evoke the past without the old fashioned traps of vintage ballet. Combining a rock solid technical base with a liquid port de bras, she projects the very essence of lightness and frailty as Nikiya, while as a shade, she is cool and ephemeral. It’s really quite amazing to watch this tiny dancer seize our attention. From  the curve of her wrist, the lilt of her upper back, and the glance of her piercing eyes, she is a complete artist.

Joseph Walsh, the tiger slaying, two-timing hero Solor, possessed all the right bravura for the part, along with great height in his jumps and over-the-top acting necessary to move the action in this old-school ballet.

Melissa Hough knows how to own the room. Her Gamzatti commands our attention, and exudes authority and a gleeful “mean girl” vibe. Hough’s athleticism and tightly-wound quality imbued Gamzatti with a ticking-bomb quality. She brings danger into the room. Right away, we knew this is a woman not to be left alone with a poisonous snake and an enemy.

Earlier this season, I named apprentice Derek Dunn as one to watch, and well, I was right. His Garuda had all the quickness and power one would expect from a much more seasoned dancer.

Not every ballet comes with its own ballet blanc but this one does. If you want to watch the quality of any corps it will all be evident in the “Kingdom of the Shades”, ballet’s most delicious opium fantasy. Kudos to Houston Ballet corps for their ability to create perfect unity and harmony, something in short supply in today’s world. You can almost feel them breathing together.