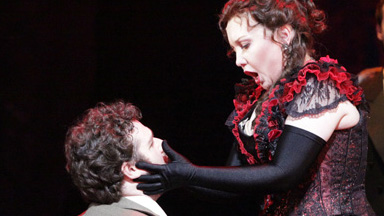 It’s rarely a good sign when your ghost appears before your death. So it goes for opera’s most beloved courtesan, advice Violetta Valery, the heroine/fallen woman of Verdi’s “La Traviata,” brilliantly re-imagined by Houston Grand Opera (HGO).

The opening sequence, with Violetta confronting her ghost self, sets the tragic tone for the entire evening, amplifying the opera’s doomed trajectory to new emotional depths. Making her role debut as Violetta, Russian coloratura soprano Albina Shagimuratova is a powerhouse. The clarion-voiced soprano fully inhabits the role, from her days as Paris’ “it” girl to her fading flower days.

Her rich and vibrant sound, combined with her swift acting, made for yet another memorable milestone for this rising opera star and former HGO Studio artist. Bryan Hymel, making his HGO debut, made a robust love struck Alfredo. Full of love at all costs furry, Hymel delivers a highly-charged performance. Daniel Slater’s direction possesses a driving pace, making the party scenes come alive with a pulsing action.

The chorus, under the direction of Richard Bado, assume the role of a single entity. They slither about, creating a claustrophobic crowd force, again a reminder of the lover’s unsustainable predicament of a world closing in on them.

Desmond Heeley’s painterly interiors also point to a fragile world, grand, but not realistic. Much like Violetta’s life and choices, they seem to fade as Violetta’s life energy drains. Michael James Clark’s lighting design casts a haunting glimmer, especially during the ghost scenes. Patrick Summers conducted the HGO orchestra with his usual precision.

In the final hour, even the half-draped chandelier has fallen, as Verdi’s “fallen woman” joins her ghost double through the beckoning curtains.