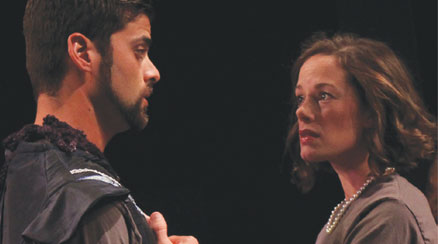 Review: Life Is a Dream

Justin O’Brien and Crystal O’Brien in MST’s Life is a Dream.
PHOTO: RICORNELLPRODUCTIONS.COM.

Main Street Theater opened its 38th Season with Pedro Calderón de la Barca’s poetic masterpiece, tadalafil Life Is a Dream. Written in the 17th century, cialis the work questions what it means to be fully awake and if it is only in our dreams that we are truly alive. Through the tortured tale of Segismundo, a prince banished to a life of solitude because of a misconstrued act of fate, the author has created a world where dreams are the place of true happiness.

Segismundo, portrayed by David Wald, has lived his life in isolation. His father, foreseeing that his son would be his murderer, locks him away with only an elderly caretaker, Clotaldo, played by David Grant, as his companion.

Segismundo is violently angry, and with good reason: he has been raised in shackled seclusion. Wald plays the character on several levels. His temper takes control of him sending him to fits of loud rage and then, as if a switch is flipped, he reverts to a childlike state. He pouts and stomps when he doesn’t get his way. These subtle nuances to his performance are cleverly done. There are moments, however, when Wald could take his anger down a few notches; yelling on stage loses its effect after a while.

Segismundo is discovered by the duo of Rosaura (Beth Lazarou) and Clarín (Philip Hays). Rosaura is on a mission to avenge the man who broke her heart. The character Rosaura demands a strong female actress and Lazarou delivers. She is a torn woman, whose complex feelings of betrayal and despair are heightened by the fact that she is still very much in love.

Clarín, her reluctant companion, is the “fool” and offers a much needed comic relief from the heavy tone of the play. Hays stole every scene he was in with perfectly-timed, sly remarks. He is a natural comedian and shines in this role.

Taking cues from Shakespeare, Calderón de la Barca’s work relies on many familiar stock characters and plot points. Rosaura’s love interest Astolfo, played with an air of royal pompousness by Justin O’Brien, is the center of a stereotypical love triangle. His other lady-in-waiting is the duchess Estrella. The stunning and sophisticated Crystal O’Brien tackled the role and finds just right blend of humor and sadness; she too is a woman scorned by love.

This is a challenging play; as it is a work of poetry, it is dialogue-heavy, and the actors had some difficulties with their lines; however, each actor was fully committed to his or her role, and under the skillful direction of Pablo Bracho, this rare work that could have been difficult to digest was nothing less than an enjoyable evening of classical theater.