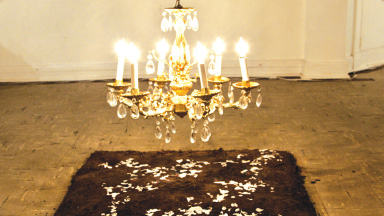 As the name suggests, “Luminous” is a show meant to shine light on, well, light. The seven contributing artists explore our often paradoxical associations with light — as an immaterial medium, a massless energy, a natural technology, etc. — in unexpected and unexpectedly resonant ways.

Co-curators/contributors Annie Strader and Matthew Weedman have done a stellar job in organizing the show as a chain of delightfully wander through. Right from the get-go, the show disarms; rather than finding some object of overwhelming radiance at the entrance, the viewer is instead confronted with a large tub of water and a makeshift Loch Ness monster. Through security cameras and other artifacts, artist Christopher M. Lavery, further elaborates on this theme of the “hoax.”

Rather than proffering the fundamental idea of light as clarity or purity, Lavery questions the ability of light, as medium of information and mediator of visual experience, to really even be trustworthy.

The image of Strader’s chandelier at the very center of the space is immediately a heavy one — the chandelier literally sunken too low, an inch-high square of top-soil reminiscent of a burial plot below it — but the true insights seem to arise from the interplay of analogs: painted plastic stands in for bronze, electric bulbs for candle flames, stenciled salt for wax drippings, the white of the salt for the black of the shadow, and the slow dissolution of the salt into the most soil for light’s own dissolution of shadow.

Tobias Fike’s projection along the stairwell wall, which at first glance appears as chaotic static, reveals itself to be a recording of sunlight coming in through a window, filtered through the swaying branches of a tree, and illuminating a rectangular patch of textured wall. It’s a simple gesture, but one of such gentle harmony that it sticks in the mind, a statement also true of Kristen Beal’s “June,” a charming wall-mounted shadow- casting sculpture that captures the experience of a rural roadside at night.

Weedman’s short film “Freeman” sits at the end of the tour. Again, a simple concept executed with sharpness and cunning: to create a narrative film not through the movement of objects but through the movement of light upon them. Setting a high standard for the kind of engaging experience a curated group show in a small independent art space can be, “Luminous” is going to cast a long shadow.