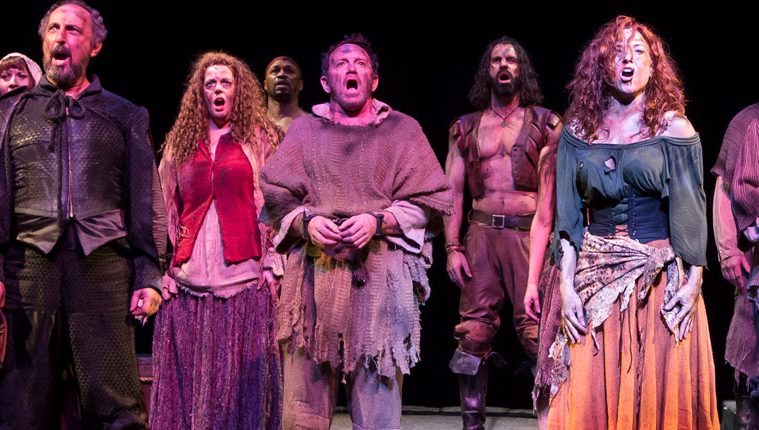 Man of La Mancha at Theatre Under the Stars.
Photo by Bruce Bennett.

Some musicals are based on B-movies, others have even less sturdy beginnings. In contrast, Man of La Mancha is based on Cervantes’ 1605 seminal masterpiece Don Quixote, considered the very first novel. It doesn’t get much better than that when it comes to source material.

The Theatre Under the Stars (TUTS) Man of La Mancha production rolled into the Hobby Center in fine form. The fact that La Mancha is chock full of lyrical melodies that I know from experience a large portion of the audience can hum (on tune too!), makes it always worth seeing again.

The 1965 musical holds up extraordinarily well under TUTS’ artistic director Bruce Lumpkin’s direction. And, although Dale Wasserman’s book, Mitch Leigh’s music and Joe Darion’s lyrics are solid, it’s actually easy to go wrong with this piece; the show’s epic anthem, “To Dream the Impossible Dream”, is almost too entrenched in our culture.  Even the Picasso lithograph of  a crumbled knight and and his servant is etched into our visual memory.

Man of La Manca at Theatre Under the Stars.
Photo by Bruce Bennett.

Paul Schoeffler moved nimbly through the three roles he moves in and out of during the course of the evening. His thick baritone rendered “Dream” clipped and forceful, letting the song work its own magic. The reserved quality worked well within the context of the story. It’s always tricky to play such an iconic role. Schoeffler gets the nobility part through and through.

Josh Lamon, as Sancho, proved a scene stealer and crowd favorite. His comic timing and warm baritone held us spellbound during “I Like Him, and “A Little Gossip.”

Houston native and TUTS’ Humphreys School alum Michelle DeJean gave Aldonza all the feisty, rough and hard edges the character demands, along with a enough dexterity to handle the role’s vast vocal range. Her riveting reprise of “Dream” carried the show home.

Patton Campbell’s rough-hewn jail turned inn/castle/deathbed centered the action, while an imposing descending staircase created a marvelous illusion of a dismal dungeon, a fitting place for a play that finds at its center the undeniable sustainable powers of illusion.