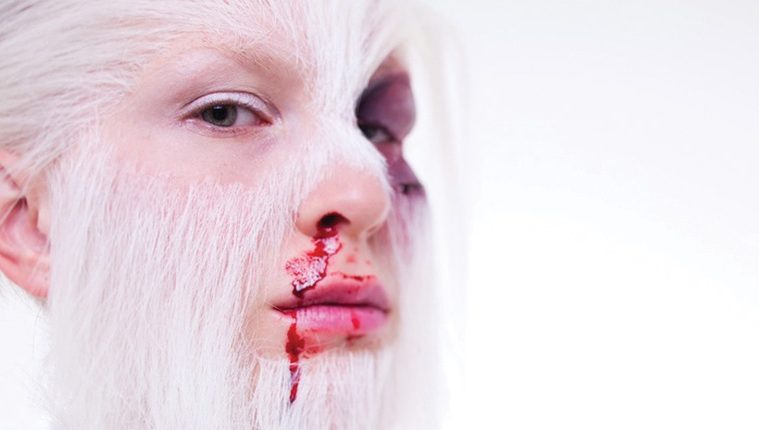 More than the materials they use, some artists are better approached by way of their unique vision. I suspect Margaret Meehan is such an artist, demonstrated by her show at Conduit Gallery, “Hystrionics and the Forgotten Arm.” If I’m right, then it might better serve us to focus principally on the show itself rather than any one of its constituent parts.

Formally, the work ranges in scale and medium, from sculpture to photography, from works on paper to installation. Each element curiously contributing to her singular, if polyphonically formed, vision. She here interweaves a few of history’s more eccentric phenomena: Circassian Women, hypertrichosis and boxing. Circassian women, coming from North Caucasus, were regarded as idealities of white beauty and elegance in the 18th and 19th century. Hypertrichosis, better known as werewolf syndrome, names a condition whereby one grows an abnormally excessive amount of body hair, most noticeably on the face. And boxing, despite what one might initially think, has its very own odd journey to the present, especially its terminology, which Meehan deftly appropriates for her narrative and titles. But what do these things have in common?

Meehan’s a surreal storyteller, an original mythographer. Sure, she’s referencing historically intriguing exotica, but she’s using it as material for her own purposes. It seems a feminizing turn of Nietzsche’s masculine appropriation of history, in which history becomes subject to our creative will. Yet, without losing or hiding any of the violence necessary for such a creative act, she simply and easily allows otherness and innocence to step into the role otherwise occupied by the common tropes of strength and familiarity.

But to answer the question, they don’t really have anything in common, they’re merely curious, each in their own way. It’s rather how she uses them. She transfigures them into representations of exaggerated purity and elegance merged with blood and brutality (as well as some absurdity and wordplay, of course). The reward comes as a waking Victorian dream, parts white and proper, parts carnival and jarring. Meehan’s vision becomes fully manifested in the images of a female figure in a white period dress, body covered in snow-white hair, sporting large white boxing gloves, yet also a black eye, and she’s bleeding from her mouth and nose. This merged imagery of the visceral with the body, of the accepted with the strange, arrives as an uncanny commentary on women and violence in society.

— ANDY AMATO
Andy Amato is an artist, writer and teacher.