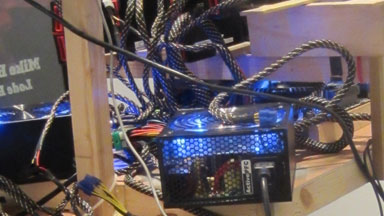 As sculpture physically occupying Emergency Room, viagra a snack-sized exhibition space at Rice University, Mike Beradino’s Lode Runner is more of a curiosity than a feast for the eyes. It looks like what it is: a DIY computer, assembled from salvaged parts, whirring and humming atop a similarly homemade plywood stand while power cords run in three directions to feed its considerable thirst for electricity. Careful observers will notice a lump of raw gold sitting on a shelf just to the right and rear of the monitor.

The amount of raw gold will gradually increase during the exhibition, meaning that the physical form of Lode Runner will change ever so slightly. But most of the action is in cyberspace, notwithstanding the real demands Beradino’s machine places on the power supply.

“Although Beradino engaged DIY methods, intentionally applying an unpolished aesthetic to construct Lode Runner, he scripted a precise computational system that solves complex algorithms in order to mint his own Bitcoins,” writes Katia Zavistovski, a Rice doctoral student and the William A. Camfield Curatorial Fellow at the Museum of Fine Arts, Houston, on the exhibition poster.

Bitcoin is the name of both a digital “crypto-currency” and the open-source software that runs it. It’s billed on bitcoin.org as enabling “instant payments to anyone, anywhere in the world (by using) peer-to-peer technology to operate with no central authority: managing transactions and issuing money are carried out collectively by the network.”

After accounting for how much power his computer uses, and based on the current economic exchange rate for Bitcoins, which like that of other currencies varies daily, Beradino expects his computer to earn about $300 to $400 during the show’s run and to pay for itself in six months. He’s tracking his earnings both with a computer graphic on the monitor that represents the growth of his Bitcoin account and with the slow, steady growth in the amount of raw gold next to the machine.

Doing so not only symbolizes the shift from one faith-based currency (gold) to another (Bitcoins) – all currencies, as Beradino noted in an opening-night lecture, are faith-based – but humorously refers to the fact that once computers become obsolete the most valuable thing about them is the gold that can be melted down from the circuit board and other parts.

Also reflecting an awareness of technology’s perpetually impending obsolescence is the made-in-the-garage look of Beradino’s sculpture. As with the imagery in his recently exhibited ASCII paintings that require a QR-code reader on a smartphone or notebook to view, Beradino’s piece is designed look obsolete, or at least retro, from the start.

Make sure you download a copy of the poster at studioart.rice.edu, because you’ll get Zavistovski’s accessible mini-essay as well as a free example of Beradino’s QR-readable pictures. This is more generous than the standard artist giveaway in that the free poster works the same way as paintings Beradino was selling in Freq Out, his recent Art Palace show.

It’s also the kind of artist giveaway you’d be wise to hang onto instead of accidentally-on-purpose sending to the recycle bin. A lot of ifs will need to line up to make this prediction come true, but here goes: if, years from now, people are talking about the Houston art scene circa the 2010s, Beradino will be one of the reasons why.