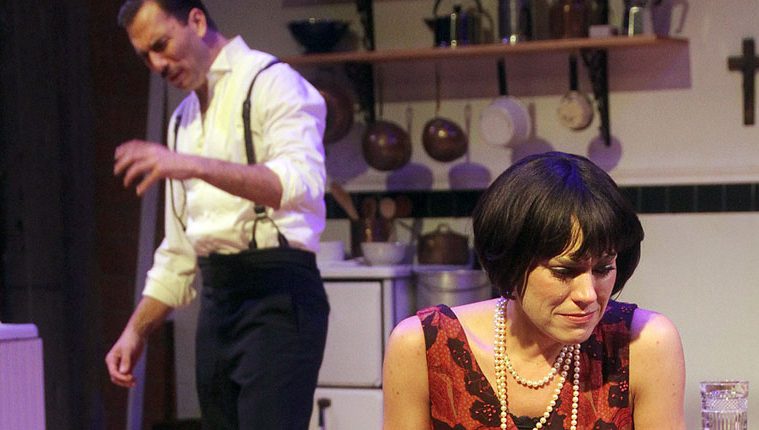 Swedish playwright August Strindberg, whose death marks its one-hundredth anniversary this year, is remembered both for his hand in shepherding drama away from overelaborate plotting towards a pared down naturalism, as well as for the psychotic breaks that sent his life spiraling into the dark realms of alchemy and the occult. Classical Theatre Company’s production of his early groundbreaking play Miss Julie commemorates the important role Strindberg played as one of the forebears of modern drama.

Set during a single night in the life of a servant couple and their titular mistress, the play tears into the volatile psychological underpinnings of class and gender power relationships, revealing its characters to be desperately sputtering, like the limes and fumes in an alchemist’s crucible, trying but failing to change into anything greater.

Originally set on a Swedish estate, Classical Theatre Company has transported the action to an upperclass house in antebellum New Orleans — on Mardi Gras night no less. As the audience takes its seats, the lights are already up as actress Michelle Ogletree, playing Christine the house cook, nonchalantly works at chopping okra. It is a gentle touch by director Julia Traber, but one that immediately asks the viewer to understand the circumstances of the servant, invisibly at work, away from the festivities.

Later on, similarly quiet moments of Christine humming to herself or fixing her hair occasionally arise amidst the other goings-on of the play, and each time it has the effect of recasting the dramatic world as reality itself. Harper’s presence as Christine, the pragmatic voice that more or less bookends the play, lends the character an easy but unbeholden charm, providing a necessary foothold in day-to-day reality against the heated anything-goes back-and-forth of the main characters.

Played by David Matranga and Jennifer Dean, Jean and Miss Julie might not be equal by any socioeconomic measure, but they match each other toe to toe in their penchants for bull-headed argument, dangerous flirtation, and selfishly-motivated manipulation. As soon as their coy banter turns to doomed romance, the play reaches its high point, simultaneously blurring and sharpening the character’s true natures and their desires to be anything but what they are.

I had a strong disinclination for the decision to transplant the play to New Orleans. I was left wondering if, as an audience member, having had to abstract the social circumstances of old Sweden might not have been an easier way to reach common ground with the characters precisely because its distance would function as an explanation for the less contemporary social mores. The new setting did allow, however, for an exquisitely homey set design by Matthew Schlief, who has created a well-stocked and finely-detailed Southern kitchen inside of Studio 101.

At the end of the show, watching Miss Julie walk solemnly off stage, straight razor in hand, and reflecting on the modernity and relevance of Strindberg’s work more than a century after its creation, I was struck by the grim severity of it all. The story of Strindberg’s near-fatal obsession with mystical science, a story which always looms perhaps overly much in my mind, took on an inkling sense. For a man so drawn to mining the internal, elemental aspects of human behavior, his characters so helpless against circumstance, it seems hopeful for him to believe that the right mixture, the right heat, could give birth to something new, stronger and more valuable.

—DAVID A. FEIL
David A. Feil is a writer and educator living in Houston.