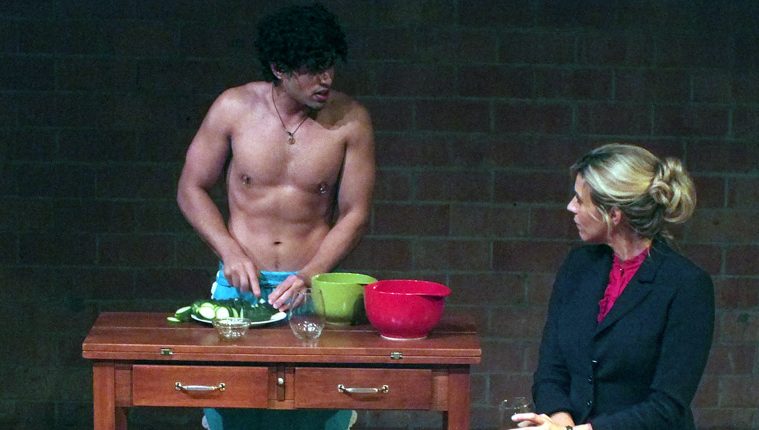 Mildred’s Umbrella opened their celebrated annual showcase of short plays, Museum of Dysfunction V, on Thursday, August 9. The selection, which is split into two sections, runs through August 18, with alternating performances. Mildred’s Umbrella received over 100 submissions from across the country to this year’s festival of bizarre shorts and has chosen a wide range of genres, subjects and themes. Given the nature of this type of festival, if you find you do not like one play you do not have very long to wait before it’s over and you are on to the next.

The first selection opens with local playwright Elizabeth Earle’s piece Time to Eat, which focused on a power-hungry woman and her desire for control – especially in the bedroom. The piece has nice touches of the never-ending female conundrum of wanting to be in power and needing to be dominated simultaneously, however its focus is disorganized and this seeps into the actors’ performances.

Ron Pullins, Dada’s Home, is an amusing take on the nonsensicalities of the mundane; the title’s “Dada” being a poke at the rejection of logic. Every day a husband and wife do and say the same thing, yet none of it is really true. Their need to repeat this charade day in and day out is thrown off by the wife’s exchange of an olive for an onion in her daily martini. With this one change, life has taken a new course. Pullins, and director Candyce Prince, do a nice job of mixing elements of Ionesco with some Sartre and the actors, James Reed and Amy Warren, are spot on with their absurdities.

Kalid Puentes and Courtney Lomelo in “Time to Eat” by Elizabeth Earle.

Donnie, by Los Angeles-based Sam Alper, is a monologue about a Southern boy turn Hollywood wannabe. It begins with a slow bubble and finishes itself at full, rapid boil. Director Jennifer Decker paces the piece flawlessly, allowing actor Kalid Puentes the time to capture the audience with his tale of a one-night stand gone terribly, terribly wrong. As nearly perfect as the piece is, it ends one line too late. Alper could stop with the revelation and leave the audience to bask in its horrific connotations.

While many of the pieces are hits, there are a few misses, as to be expected from a collection of shorts. Los Angeles author Dian Lefer’s monologue, Future Forward, which is adapted from a previously published short story, proves that sometimes short stories do not translate well to the stage. Actress Danitra Luers does the best she can with the work, but it drones on for so long, making little sense, her heartfelt portrayal of a woman scorned is lost in a sea of wordiness.

The show ends with a piece by playwright and professor Ken Kaissar entitled Sinking Ship. It sunk. Whether it is the experimental nature of the piece or the fact that the large cast, of mostly half-dressed men with large bulges in their pants, is placed in random moments that seemingly have little connection to each other, it doesn’t work.

Viewing the evening as a whole, there is enough good work to cancel out the bad, and Mildred’s Umbrella’s cast of regular actors always performs their hearts out. Additionally, Mildred’s deserves kudos for taking chances on new works and offering audiences something different than the status quo.