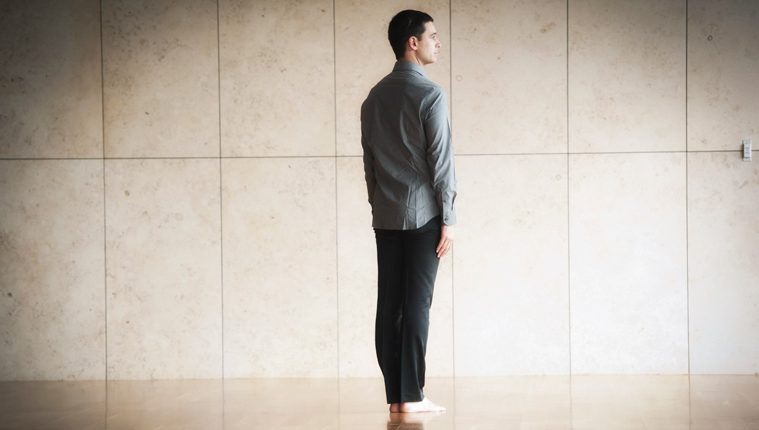 Jonah Bokaer in On Vanishing. Photos by Jeff Fantich.

Asia Society Texas Center in partnership with the University of Houston Cynthia Woods Mitchell Center for the Arts.
May 19 & 20, 2012

Layers of juxtaposition operate in Jonah Bokaer’s On Vanishing, a new adaptation  performed at the Asia Society Texas Center in partnership with University of Houston Cynthia Woods Mitchell Center for Arts.

On Vanishing was originally created for the Guggenheim as a response to  the retrospective Lee Ufan: Marking Infinity. Now the work has been re-configured for the elegant Edward Allen Rudge II Education Center at the Asia Society.

Perhaps the first juxtaposition of meaning is the proximity to Lee’s new installation Relatum – signal. The audience has a chance to view the installation before and after the piece. With stone and steel, Lee is also interested in coupling.

So we begin with a pairing, one work, fixed, the other, Bokaer’s piece, occurring in space and time. With Bokaer, there’s often a lesson in perception embedded in the experience.

After the performers enter single file, Bokaer takes his position, upstage facing the diagonal, with his head turned 45 degrees to the right looking out the expansive ceiling to floor windows to a green space. We watch and listen to the opening passages of One8 by John Cage, as our senses settle to the quiet, to the spare elegance of a standing still body in a room.

Designed to be viewed from either the length of the rectangle or the horizontal setting, On Vanishing succeeds in both orientations. Viewed from the bottom of the space, the echo of Lee’s installation was more apparent. The drama of the early evening sun added a surprising theatricality.

The orientation facing the windows had a more spacious feel, as the backlit dancers emphasized shape. The lush green of the background trees and the occasional swoops of random birds let the natural world enter the room. It’s in these direct relationships between room and moving/still body that the piece achieves its richness.

There is also a clever reference to Lee’s performance piece Things and Words (1969) in the section with large sheets of Japanese paper. Here, the dancers make their marks, scrunch the paper and embed themselves into form to make forms.

Like most of Bokaer’s work the performers are integral to the composition. Not one to model his operation like a traditional company, Bokaer selects his dancers with great care. Each is a solo performer in their own right. Although they may share similar training and artistic practices, they offer deeply individual qualities. It’s in these subtle differences that On Vanishing’s surfaces sparkle.

Bokar is a mover of extraordinary clarity, who evokes a calm sense of control. Adam H. Weinert’s wiry presence adds an energetic force, light but anchored in precision. Chun-Chen Chang falls without warning or fear. There’s a wit in her dancing. We never know what will come next. She gives no clues. Sara Procopio’s sculpted port de bra extends through her torso into her legs and through the floor. It’s like the floor is speaking through her, and, when she turns her gaze through the room,  from the walls too. She has a meditative force, drawing us in with the mere turning of her head. James McGinn hurls on the stage like a loose canon, interrupting the calm, but adding a visceral excitement. Together, they give us so much to watch.

Celllist Loren Kiyoshi-Dempster was superb in his performance of the Cage piece.

Bokaer’s On Vanishing marks the very first formal dance performance for the Asia Society. To launch with a work so deeply considerate of the ground around it feels fitting.

The choreographer poses an impossible task (not unusual for Bokaer): to oppose the act of vanishing and to create movement that changes the public’s experience of a space. Check. Done.