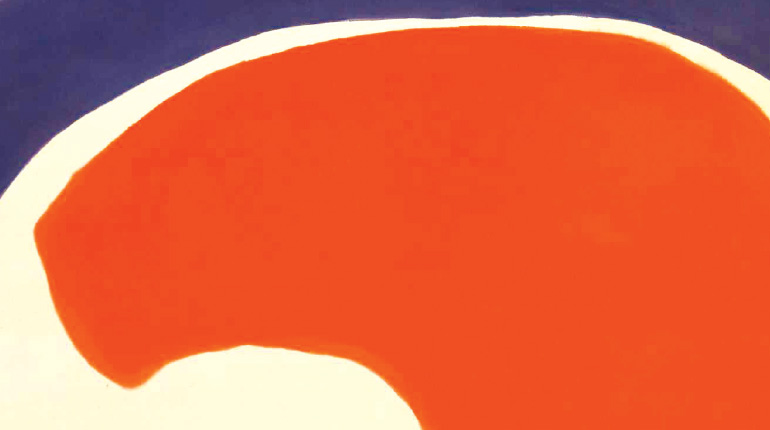 “Revelation: Major Paintings by Jules Olitski” is a tight and quietly heroic retrospective of the work of Ukrainian born American painter Jules Olitski (1922–2007). The crowding of the exhibition’s 30 paintings is somewhat misleading, as the show can feel like a clipped account of Olitski’s career when, in fact, it is closer to a full-fledged overview of almost five decades of the development of style and technique.

Dating from 1962 to the last years of Olitski’s life, the monumental paintings on exhibition in the second floor of the Mies van der Roe-designed MFAH show the wending of a painter, from the watery paint and soaked surfaces of the early 1960s to paint wrought as magma in the early 2000s.

If not for the boxy, obfuscatory outlay of the “Tutankhamen” exhibition just across from “Revelation,” Olitski’s surfaces would communicate directly with the glass box sheath that is the skin of the building. Modern painting and architecture would together strike a seamless play of flatnesses, from Olitski’s evanescent mistiness to Mies’s glass transparencies. As a study of painting in its last years of sincerity and medium specificity, though, “Revelation” tells a hilly narrative of abstract form and painterly gesture over the second half of the last century.

The paintings are hung with little reference to history or context. Creating something of a chicken-and-egg conundrum, it is not so clear if they are actually bold and beautiful enough to transcend time or if curators have, in saying little about the sometime heady contexts in which they were created, framed the paintings as such. I will go with the former, and give little further energy to the latter.

While not the most famous paintings of his career, the spray-guns works “Patutszky in Paradise” (1966) and “High A Yellow” (1967) are inherently beautiful in their uncanny signification of painting as a mythical act. The colors in the giant “Patutszky in Paradise” spread across the surface of the canvas like a spectral mist, moving from yellowgreen in the bottom right corner to pink-orange in the upper left. The shifts in color are far subtler in “High A Yellow,” shifting right to left from dark, opaque to a lighter, transparent yellow. Playful and better-known, Olitski’s soakstain paintings from the early 1960s hang along an adjacent wall and behind the breathtaking “Patutszky in Paradise.” Paintings such as “Prince Patutszky’s Pleasures” (1962), “Purple Golubchik” (1962), and “Monkey Woman” (1964) are examples of what seminal 20th-century art critic Clement Greenberg called “post-painterly abstraction.” Part of an exhibition of the same title at LACMA curated by Greenberg in 1964, paintings of this style were considered by Greenberg, later followed by Michael Fried, to bear a “pure opticality” — a rarefied sense of vision singular to paintings of this type.

Let us be grateful that the paintings do have presence — that their beauty is strong enough to outlive the provocative though epoch-limited antiquarianism of unadulterated vision. Time has taught, as has the jam-packed installation of Olitski’s paintings at the MFAH, there is little that is pure in art.