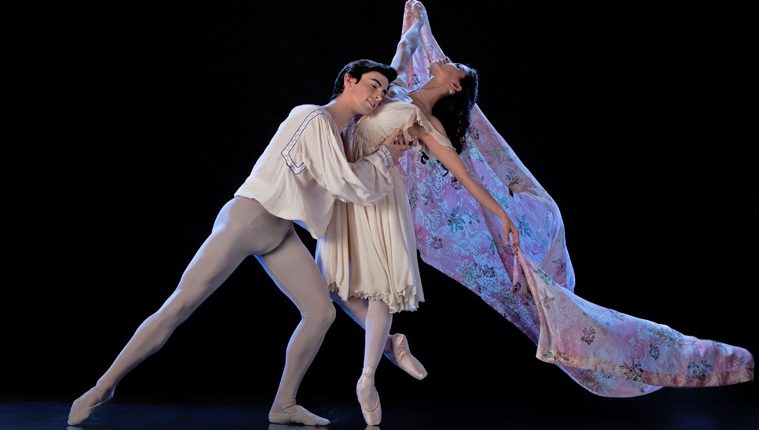 How is it that, after seeing Shakespeare’s Romeo and Juliet on stage, on film, transformed into a musical, and numerous ballet versions we still feel these tragic lovers’ epic pain?

In the case of Houston ballet’s recent revival of Ben Stevenson’s Romeo and Juliet, the honor would got to Karina Gonzalez and Ian Casady, a pairing ballet fans will be talking about for a good long while.

Let’s start with Gonzalez. This is her first Juliet on Texas soil. She looks like a Juliet, young, all spring and lightness, not that far from girlish ways. When she bursts on stage, it’s as if someone just let a gaggle of butterflies loose. She dances above the ground, so stirring up the air that it takes a while to settle again. Her effervescent presence makes a startling contrast to the gravitas around her, with a distracted mother, and a father who wishes she would just settle down and marry Paris.

But she’s not all mischief and mayhem; as the story progresses and Juliet has to grow up quickly, we see Gonzalez taking on a different quality. Shape becomes more defined, even restrained, as she allows her limbs to carry weight, even dread. Her unearthly quality deepens into the ground. Her performance assumes the nucleus of the story. When she’s off stage, you miss her and hope to get to the next part. She’s a ballerina of extraordinary range, technical ability and transcendent grace. This is a dream role for her to show it all off.

Casady undergoes a similar transformation, from one of a gang of party boys to lover and husband. He too, like Gonzalez, has a keen ability to modulate innocence.  We know from the start that he’s capable of making grave decisions. It’s a life condensed in three acts. Casady rides that arc with a knowing presence; he’s a dancer with a rare psychological dimension. The two are so well matched that even the word “chemistry” doesn’t suffice.

Oliver Halkowich as Mercutio hit all the right notes, along with his side kick, nicely played by Rhodes Elliott. Christopher Coomer’s restrained swagger as Tybalt added equal doses of drama and trauma. And there was something miraculous about Aria Alekzander’s Nurse.

There are moments when the production shows its age, but not many. Some of the timing of set transitions were abrupt. David Walker’s crimson and gold-hued set and costumes hold up remarkably well, giving us glorious stage pictures. This production marked the opening of the Wortham some 25 years ago. Now in 2012, with Gonzalez and Casady’s breathtaking performances, it marks a new age of talent.