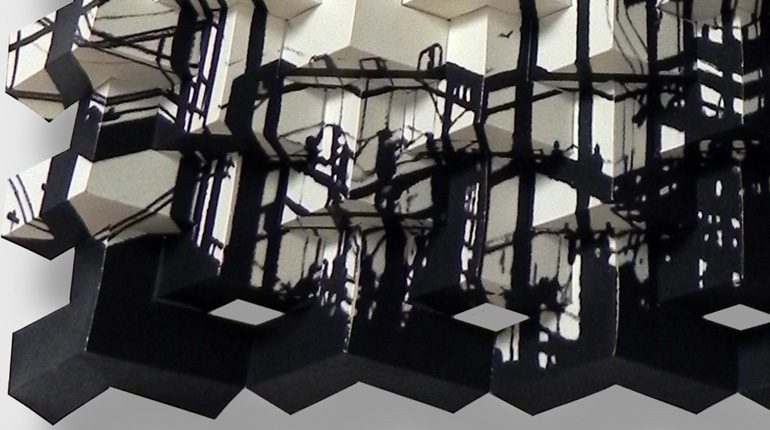 The wall-mounted Cube Network pieces use photographic sources but are actually charcoal drawings painstakingly folded into interwoven units akin to 3-D stitches. Starkly backlit, they depict tree branches and power lines as seen either or at dusk or, in the case of works titled Rip Van Winkle, just after a dust storm had swept into Dallas, leaving the sky browned out and Scruby feeling like he’d stepped out of a movie. The images’ structural emphases work well with Scruby’s interlocking cubic elements as they piece together the scenes.

Using photo-editing software, Scruby reduces a mosaic-tile-size piece of a picture to the color point at its center, then builds up the image either with adjacent hexagonal pixels, interlocking circles or some combination thereof.

The interlocking circles allow for the most tonality and texture Scruby permits himself, but the Cherry Blossoms’ austerity somehow yields a greater overall feeling of lushness than much pixelated imagery.

Intriguingly bridging the two bodies of work is Iris – Hex Grid Study, a two-year old line drawing of an iris. Like his photographic reconstructions at the time, it is more defined at the center and less so as iterations of its flowers and stem ripple out in increasingly reductive shapes that can be seen as variations on the repeating hexagon.

To his elegant line drawing Scruby has added a few hexagons – one black, two gray, several white – to the composition as if beginning the process of reducing each area to the most basic unit of information. It’s a welcome addition to the show, both for its window into Scruby’s process and its own distinctive beauty quite unlike anything else on view.