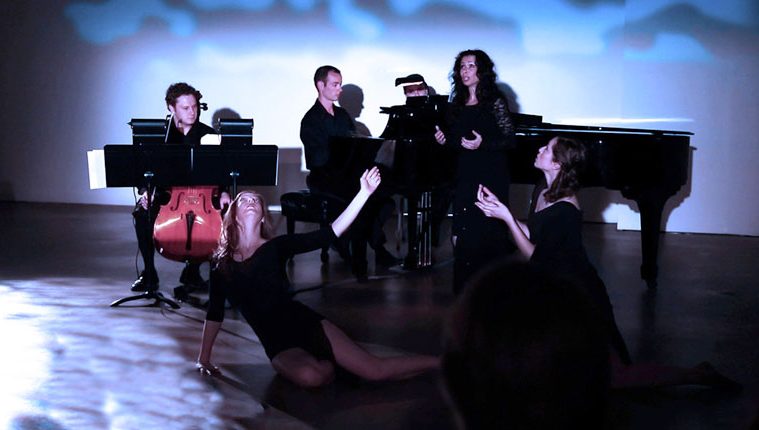 The origin of a myth has its roots in the earth as much as the soul of a people. Thus, it makes sense that the legends of the half-human/half-seal Selkie creatures hark from the Northern British isles, a place where sea merges with land, and where sea has consumed the land.

It’s no wonder then that New Orleans native Misha Penton found herself fascinated with the Selkie myth, so much so that she commissioned an opera from Elliot Cole based on her libretto/poetry. The soprano sets the scene, describing the setting as “between-places at the edges of dreams and the boundaries of logical knowing.”

The experience of Selkie also dwelled in an in-between world, part concert, dance performance, CD release event and film, followed by an elegant after party. Penton, artistic director of Divergence Vocal Theater, is more interested in creating an atmosphere than just telling a linear story. She instructs the audience in the program to “allow words, music, movement and images to play like light on water,” and indeed that is the best way to experience the performance. Cole’s music stays true to the imagistic contours of Penton’s poetry, lending a physical sense of water’s ebbs and lulls, with an occasional roar of a wave crashing into the beach. Penton’s vocal range and color merge well with Cole’s lyrical approach, allowing the drama to build and flow. She brings us into her internal world in such a way that we don’t miss the more theatrical trappings of opera. Pared down to the essentials, the proportions of the environment seemed well-thought-through.

Penton has gathered an impressive team of collaborators, including Patrick Moore on cello, Kyle Evans on piano, and dancers Meg Brooker and Yelena Konetchy of Thel Dance Theatre. All of them seemed to fit cozily in the downstairs gallery at 4411 Montrose, with the intimacy amplifying the piece’s rich undercurrents. In the end, Penton’s hybrid event served her work well.

The performance concluded with a showing of Penton’s first music video, Softly over sounding waves, shot on the glorious coast of the Pacific Northwest. After all the image conjuring done by the collective of Penton, Cole, the dancers and musicians, it was satisfying to end with lush cinematic visuals.