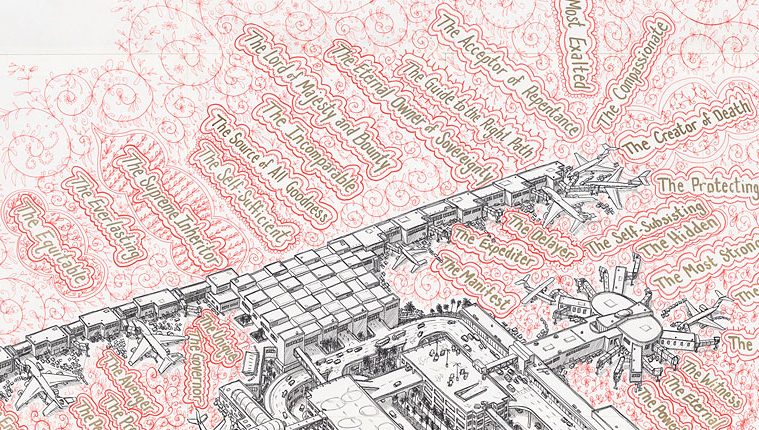 Review: The 99 Names of God

The 99 Names of God is a collaborative social commentary art project by artists Sandow Birk and Elyse Pignolet. Much of the show is comprised of 5 large and intricate bird’s eye view drawings of US airports.  These, we learn, are the airports used by terrorists to initiate the attacks on the World Trade Center towers and Pentagon on September 11, 2001 – San Francisco International (SFO), Los Angeles International (LAX), Newark Liberty International (EWR), Boston Logan International (BOS), and Washington Dulles International (IAD).

The six feet by six and a half feet (!) ink on paper drawings are impressive in their scale, detail, and expert technical rendering alone.  Drawn in black ink, they represent those familiar anthills of modern civilization and dizzying surrounding roadways we’ve all learned to navigate in order to travel.  Juxtaposed on the drawings, however, are vine-like Islamic decorative ornamentation in colored ink and airport gates identified in gold with one of the names of God from the Qur’an – sometimes in Arabic, sometimes in English, and sometimes in tight calligraphy.  The contrast is unusual and stunning.

What struck me as I viewed the show was the number of times I’ve passed through each of these airports, a weary business traveler annoyed by all the inconveniences of air travel.  Except for a very brief time after 9/11, I pay little or no attention to my surroundings or the people I’m traveling with.  On the one hand, these buildings are a modern miracle of efficiency and complex technical sophistication.  They can be first-world citadels – happy places where family members greet and hug, lovers kiss, and new lives are begun.  On 9/11, though, these five airports became the catapulting locations for terror and evil.  Hundreds of cars, trucks, and buses are depicted in the drawings – moving along all those ribbons of road leading in and out of the airports – unaware of the nascent evil about to be detonated on a few flights that day.

The artists remind us that God was there too – at each of those airports, at each of the gates.  There’s “The Protecting Friend,” “The Most Exalted,” “The Delayer,” “The Preventer,” “The Protector,” “The Source of Peace.”  To consider how this can be, too, is to consider one of the great questions of all the world’s religions:  If God is omniscient and omnipotent, why is there evil in the world?

The artists help us to frame the question, but don’t attempt to answer it.  You will be thinking about this show for days after seeing it.

In the same gallery, artist Sandow Birk displays 13 other pieces – 12 of which are beautiful modern illustrated manuscripts called American Qur’an.  In these, Birk illustrates chapters of the Qur’an with enigmatic American scenes and English translations of the text.  In the best of them, the illustrations bump out past the ornate page border in acts of quiet disobedience:  a graveside funeral service, an archeological dig, a hospital delivery room.  These simply framed folios will pull you in to experience both reading from the Qur’an and admiring Birk’s detailed paintings.