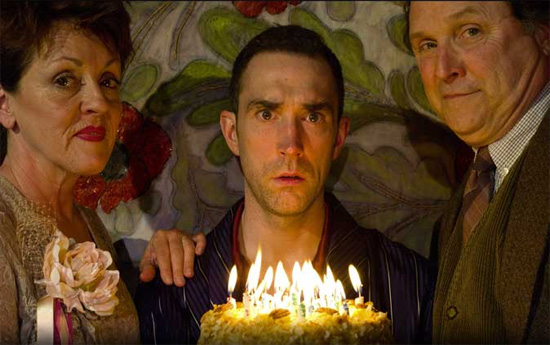 Harold Pinter’s The Birthday Party was first performed in 1958, around the same time as Ionesco’s Rhinoceros and Albee’s The Zoo Story, ushering in a movement called “Theater of the Absurd” and what some critics dubbed “Comedy of Menace.” Of course, absurdism can prove a very useful device for the exploration of values and how we actually live, though in comparison to many current shows that have come along since (Durang’s Titanic, Albee’s The Goat or Who is Sylvia?, Shepard’s Buried Child) The Birthday Party might seem positively lucid. Sometimes the question of absurdity, in light of how little we see on the stage that resembles our lives, seems almost moot. Conventional logic, applied to the world we inhabit, and our attempts to find answers in the midst of grotesque and random atrocities, catastrophes and tragedies can often seem a very poor tool indeed.

The Undermain’s current production of The Birthday Party, directed by Patrick Kelly, is lively, clever, and buzzing with unspoken toxicity. Meg and Petey Boles run a boarding house by the ocean, where their single guest, Stanley, occupies a room. Petey seems affable, Meg positively dotes on him, and Stanley himself is petulant, moody and paranoid. Over breakfast, Petey announces two unidentified gentlemen have inquired about accommodations. Meg is nonchalant but Stanley is clearly rattled. Two strangers (Goldberg and McCann) appear, dressed sharply in the mode of professional criminals. While Stanley’s absent, they insist on throwing a birthday party for him, though there seems to be some confusion, regarding the actual date. Unwilling though the guest of honor may be, festivities ensue. McCann and Goldberg act out their true sociopathic inclinations.

In The Birthday Party, a number of things do not add up. Or perhaps they do, but not in the way we might expect. Meg and Petey feel an attachment to Stanley, but how and why is never explained. Initially we wonder if Goldberg and McCann have some unfinished business with Stanley, but eventually surmise they are just as nasty towards others. While we might consider Stanley’s alienation peevish and gratuitous, by the end, it seems appropriate. Like Emily Dickinson, Pinter seems to believe the best way to snare the elusive truth, is to come at it indirectly, by slant. He doesn’t seems interested in satiating our need for a reassuring, resolved narrative. He seems to delight in showing us just enough to suggest vindictiveness and chaos, lurking just beneath our trivial considerations. Questions like: How are the cornflakes?

Undermain has taken on the daunting task of doing justice to a show pronounced very early on as an “instant classic” of world theater. They have done so with confidence, incision and distinction.