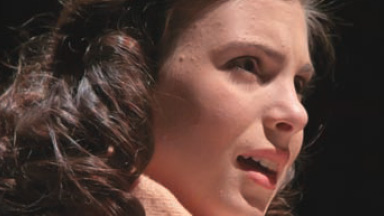 Review: The Diary of Anne Frank

Attending a stage performance of “The Diary of Anne Frank” feels like participating in a purification ritual. Pretty much everyone knows what the outcome will be. So what is the stage adaptation’s appeal? How does it draw and hold attentive audiences? It’s the attraction of Anne Frank’s indomitable courage and unflagging, ailment sweet optimism in the face of hardship and impending discovery and death. Through her diary, Anne lives on in the hearts and imaginations of multiple generations. 1.5 million children perished in Hitler’s World War II Holocaust; Anne embodies the soul of all of the children cruelly slaughtered.

WaterTower Theatre presents an inspirational mounting of this beloved classic. Wendy Kesselman revamped and expanded the stage play in 1997 after additional diary entries surfaced. Terry Martin guides his able cast in a simple, realistic, straightforward incarnation, never milking emotional response unfairly. The audience gets drawn into the families’ everyday life routine so completely that when the Nazis burst in, they experience the shock and terror of the moment right along with the captured Jews on stage. No matter how intellectually prepared one may be, grief and horror wash away all reason. The audience weeps openly, some people uncontrollably. The tears inspired are impossible to shake off for some time.

Strong performances dignify the show. Molly Franco captures the timeless essence of the icon Anne Frank and brings her vividly to life as a temperamental, headstrong teenager. Jessica Renee Russell gives a strikingly moving performance as Anne’s fragile older sister Margot. Paul Taylor, Lucia A. Welch and Travis Trope fit beautifully together as the troubled Van Daan family. Stan Graner finds all the right levels in his portrayal of Otto Frank, Anne’s father, the Holocaust survivor. His poignant delivery of the play’s final monologue blesses the performance with genuine grace.

Director Martin and his cast work hard to overcome the wooden script. Some characters suffer from the clumsy writing, no matter the talent of the actor in the role. The cast uses the multilevel set well (Clare Floyd Devries design), but its uncluttered openness never quite conveys the claustrophobic cramped sense needed for the characters elbow-rubbing frustrations to play with veracity.

WaterTower Theatre produces “The Diary of Anne Frank,” adapted by Wendy Kesselman, in cooperation with community partner The Dallas Holocaust Museum Center for Education and Tolerance. May the spirit of Anne Frank inspire tolerance and remind us to work for a world where such evil as the Holocaust never happens again.