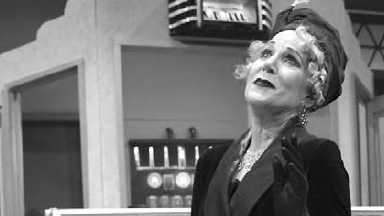 Review: The Frequency of Death

Kurt Kleinmann’s Pegasus Theatre inaugurates the new year with an original play from his company’s unique niche — the trademarked In Living Black & White production style. In 2012 Pegasus delights its audiences with a revamped, refreshed version of a production drawn from its 1980s Deep Ellum incarnation, “The Frequency of Death!” Set in the recording studio of radio station WKIL, the play spoofs the melodramatic style of 1930s  black-and-white movies with a murder mystery within a murder mystery, featuring a cast of loveable cranks, curmudgeons and distressed dames and damsels.

A sultry stunning addition to the program, torchy chanteuse Simone Gundy, warms up the crowd in front of the curtain and sets the 30’s scene with a jazzy set of classic tunes, ranging from “Johnny One Note” to “Pennies form Heaven.” Samantha Rodriguez’ costumes, with a perfectly ridiculous “radio antenna” chapeau for Mansur’s diva, carry forward the play’s themes and the Pegasus Theatre’s signature “black and white” visuals. At finale, everyone eagerly waits to see what version of Lady in the Red Dress emerges from the grey-scale environment. Aaron Patrick Turner’s sweeping blood-red gown on producer Barbara Weinberger is simply to die for.