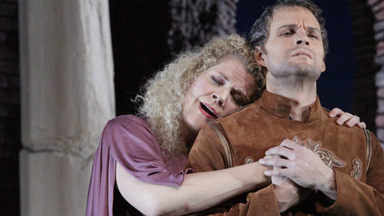 Review: “The Rape of Lucretia”

Britten wrote the opera as Great Britain was coping with the trauma of World War II: rationing, air raids, hundreds of thousands of soldiers dying, endless fear. It premiered in 1946, and is tells the story of how the virtuous Lucretia, wife of Roman general Collatinus, is raped by Tarquinius, son of the king. Following her violation, Lucretia takes her own life. In history, her body was paraded through the streets of Rome, and the horrors she endured so enraged the people, they revolted against the monarchy, becoming the Roman Republic.

The opera’s events unfold with both dangerous passion and elegant grace, carried along by Britten’s music, so powerful and evocative that it grabs you and sweeps you along in its wake. Anthony Dean Griffey’s ringing tenor is superbly used in the male chorus and his counterpart, soprano Leah Crocetto as the female chorus, is excellent as they both narrate the events on stage and question them, using the tenets of Christianity to uncover the events of pagan Rome. As Lucretia, mezzo-soprano Michelle De Young is sublime, her voice vibrant, strident as she fights for her virtue and ultimately makes her final sacrifice. Collatinus is infused with Ryan McKinney’s rich, deep bass-baritone and Jacques Imbrailo brings a finely toned and welltextured baritone, to his performance as bullying Tarquinius.

Conductor Rory Macdonald moves the orchestra across Britten’s score with incredible energy and pathos, the music a brilliant foundation to the opera’s passion play. Arin Arbus makes her opera directing debut here, proving that she’s a force to be reckoned with. This chamber presentation asks more questions than it answers, and offers little solace when all is said and done. But its implications that one person may be the tipping point to great things demonstrates that humanity can rise above violence and evil.