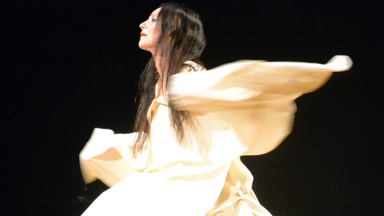 The Rumi-atics came out in full force to the Brown Foundation Performing Arts Theater at the Asia Society Texas Center on May 22 to see the great sage and Rumi translator and scholar Coleman Barks. If anyone can bring the 13th century Sufi mystic, Jalāl ad-Dīn Muḥammad Rumi, into the present, it’s Barks.  Author of Essential Rumi and numerous other books, Barks may be the reason we know who said. “Out beyond ideas of wrongdoing and rightdoing there is a field. I’ll meet you there.”

And, the friends had a purpose. In the 13th century poetry, music and dance often accompanied the text. At first, I found it overkill. I’m happy to just hear the poems by themselves, but alas, a rhythm emerged, merging word, motion, drumbeat and music.

I was even more skeptical when it came to the dance element. Usually dancing to poetry becomes way too literal, and there were times it was, yet Zuleikha’s pixie charms won me over. Trained in Kathak, Balinese and Japanese dance forms,  Zulekha offers a world dance blend. Plus, her spinning was impressive as well.

“Bach and Rumi is almost enough,” joked Barks, as he and Darling went through Rumi’s greatest hits we know and love. In the second half of the evening, Velez finally got to show off in a fabulous percussion solo. The sold out crowd appropriately went into ecstasy.

All in all, it was a joyous evening, entertaining and, well, spiritually charged.