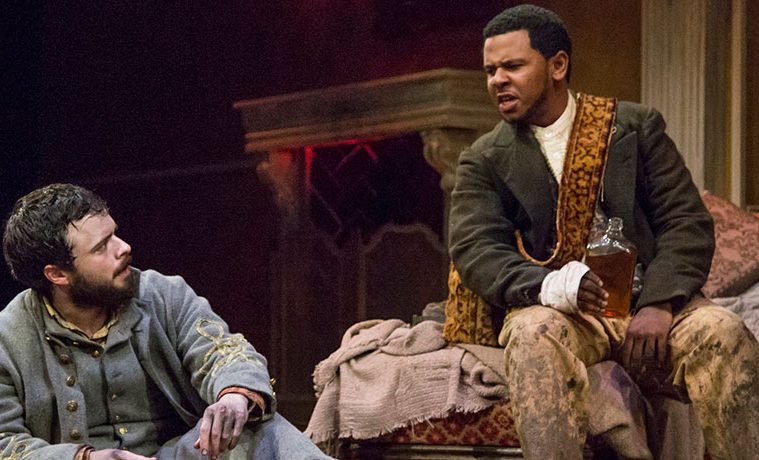 IMAGE ABOVE: Ross Bautsch as Caleb and Joseph Palmore as John in The Whipping Man.  All photos by Bruce Bennett. 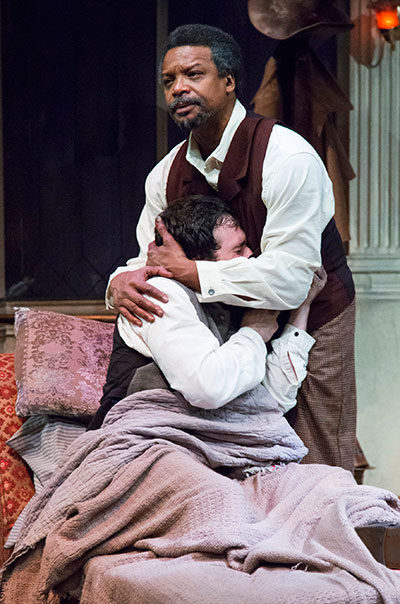 Ross Bautsch as Caleb and Shawn Hamilton as Simon. Photo by Bruce Bennett.

Three Jews, all members of one family, sit down to Seder to celebrate Passover together in a moment of peace at the end of a long and brutal war. This scene would be the thematically rich center of any drama about war or religion, but in Matthew Lopez’s Obie award-winning play, The Whipping Man, which makes its regional debut at Stages Repertory Theatre through May 25, that meal of bitter herbs and salty tears, is also dense with ironies. You see, this war-torn country is the United States only days reunited by the end of the Civil War, and two of those Jews are former slaves, the third a wounded Confederate officer whose father owned them.

All three men, Simon, Caleb and John, have returned to the once grand, now ravaged Richmond house—effectively staged by lighting designer Renée Brode and scenic and properties designer Jodi Bobrovsky—for

different reasons. Each man carries a secret to this Passover dinner that with their revelations will cause the men to question their faith—or

for Caleb and John a now comforting lack of it—in God, family and identity.

Simon, played by Shawn Hamilton, the spiritual center of the play and the family, has only come back to the home, where he spent his life in service and bondage, to await the return of his wife and daughter. The DeLeon patriarch, Caleb’s father, has promised Simon money and a paid role in rebuilding the family. 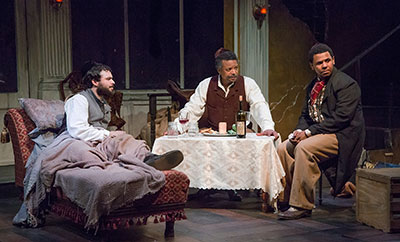 Caleb DeLeon, played by Ross Bautsch, stumbles home with a possibly lethal leg wound, seemingly only in search of the one place of refuge and peace he knows in the world. It takes almost the entire play for Joseph Palmore’s John, a young former slave, full of understandable rage and bitterness, to reveal the real reason for his own return.

Biblical allusions lie heavy in every scene of the play, but they never weigh it down. Though the Exodus story is central in The Whipping Man, with Simon referencing the great father Abraham (Lincoln) as the American Moses who cannot enter the promised land with them, I saw echoes of the Book of Job, Cain and Abel, and Jacob’s God wrestling in Genesis in this story as well.

Director Seth Gordon keeps the play from drowning under the weigh of its Biblical and historical themes and ironies by pulling several moments of levity and even physical comedy from the bleakness of the situations. I might have even spotted some flickering candlelight of hope for these characters in Gordon’s direction of Bautsch and Palmore in the last few moments of the play. 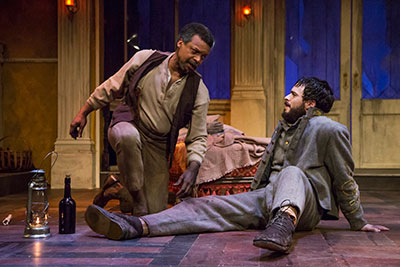 Shawn Hamilton as Simon and Ross Bautsch as Caleb. Photo by Bruce Bennett.

One of the highest compliments I can give to Bautsch and Palmore is that they both hold their own on stage with Hamilton. Bautsch manages to express Caleb’s sorrow, anguish and self-pity all the while confined to a chaise lounge for most of his performance. Palmore accomplishes the difficult task of conveying that for all John’s childish bravado and seething hostility, he is probably the most intellectual man in any room, but never the wisest. Yet, if I were giving out 2013-2014 Houston theater acting awards, adding Hamilton’s turn as Simon to his recent performance at Main Street Theater as a Union soldier in A Civil War Christmas, would easily win him a best actor title. (Calling all local theater artistic directors: please find roles to keep him around for awhile.)