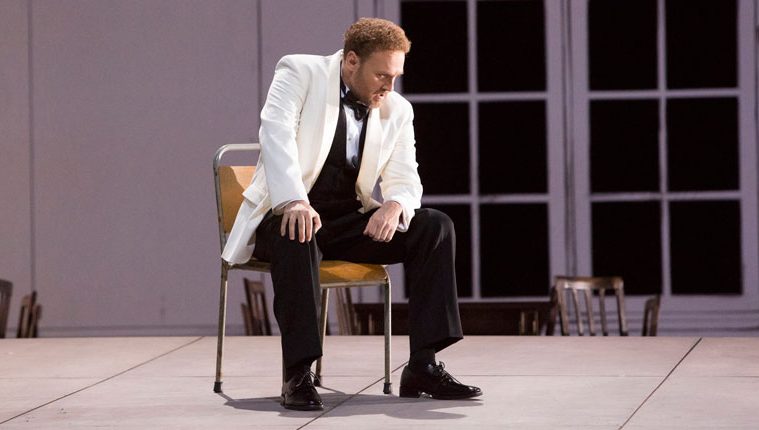 Can you bear the burden of love? With a love beginning in rapture, vcialis 40mg malice, pilule bliss, diagnosis and deception that finally eases into sweet death, Houston Grand Opera presents Wagner’s legendary Tristan and Isolde, with extraordinary attention to the emotional angst inherent in this opera.

Tristan and Isolde marks the final repertory in HGO’s 2012-2013 season, with only Verdi’s Il trovatore left to open next week. From the opening “Tristan chord,” Artistic and Music Director Patrick Summers’ remarkable talent as a conductor was clear. Don’t be late to this opera—the opening orchestral Prelude flows without a pause into the first act, with a rich, melodic, orchestral layering that creates a potent mood of urgency and suffering that builds until the final harmonic resolution in the closing scene.

From her first entrance, soprano Nina Stemme proved to be an exceptional Isolde. Right after the long love duet in Act II, Isolde sings her highest notes of the opera—two high Cs—which require a daunting  vocal leap of more than an octave. Often, these two notes come off as a quick screech, but Stemme made them sound like aural gems. Shifting effortlessly from righteous outraged to passionate torment, Stemme proved her emotional depth as well as her technical prowess. Tenor Ben Heppner hit his stride as Tristan in Act III where, fatally wounded, he sang with the timbre of a lover deeply afflicted on more than a physical level.

from the 60s with few wardrobe changes, bringing a unity of time to this “night of love.” The stage was bisected by a thick velvet curtain that separated a banquet hall from a slanted stage with an impregnable silver wall. In Act III, the banquet hall erupted in a slow-motion fight (choreographed by fight director Brian Byrnes), illustrating that while another reality raged on, time for the two lovers was only about being together, even in death.  Lighting Designer Olaf Winter deftly used shadowy projections on the silver wall, bathing the final scene, the Liebestod, in a halo of morning light.

This Wagner masterpiece is not a trifle—not only because of its heavy mystical emphasis on love and death, but also its incredibly demanding score—and HGO handles it with professional agility.