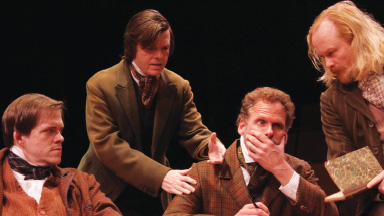 If almost anyone — even a good friend — came up and asked you to sit still while they read aloud nine hours worth of imagined conversations between 19th century Russian intellectuals, stomach nobody would blame you if you suddenly found a pressing need to see a man about a horse.

If the invitation came from Tom Stoppard, however, the playwright renowned for melting frigidly academic themes into his characteristic frothy-yet- heady brew, a piqued curiosity might win out. At least that’s the gambit Main Street Theater has made in devoting a hefty chunk of their spring calendar to a new production of Stoppard’s 2002 trilogy “Coast of Utopia.”

And the curiosity-piquing doesn’t end with Stoppard’s distilling of decades of intellectual fervor onto the stage, seeing as MST has had to undertake the similarly daunting feat of carving down the epic scope of the play’s production requirements to fit their necessarily intimate venues.

But if all the logistics loom in the abstract, it is in the details of the performances that the production seems less and less like a gambit and more like a sure thing — and an enjoyable one, at that.

“Voyage,” the first part of the trilogy and chronologically the earliest plot-wise, introduces us to the less-than-household-names of philosopher Mikhail Bakunin, literary critic Vissarion Belinsky, and poet Nikolai Stankevich, among others, and revels in their youthful follies of both the philosophical and romantic variety as they pass back and forth between the Bakunin family’s country estate and the ballrooms and squalid living quarters of Moscow and Petersburg.

Much credit goes to Guy Roberts in the lead role of Bakunin; his relentless energy brings the character to life as the type of manic man-child that, had “Voyage” been conceived as a Mel Brooks film four decades ago, Gene Wilder would have been the shoe-in for.

Joel Sandel likewise stands out as the simultaneously weary and tireless Belinsky. The staging uses the compact space of MST’s Chelsea Market location wisely: the scene-changes pass fluidly between upper crust parlors, lowly hovels, and street-side cafes, as the plot leaps through a decade’s worth of revolutionary waxing.

MST has given “Voyage” almost a month to let audiences wet their toes in Stoppard’s esoteric tide-pool before the remaining two parts (“Shipwreck” and “Salvage”) begin their run. Now the waters ahead, though deep, no longer seem overwhelming or unnavigable — bring on the “Shipwreck!”

— DAVID A. FEIL
David A. Feil is a writer and educator in Houston.