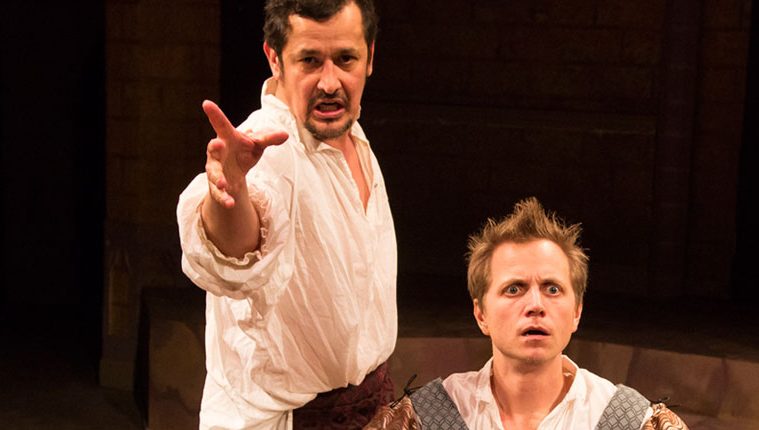 Stages Repertory Theatre’s rendering of David Davalos’s delightfully quirky Wittenberg may be the one show in Houston you shouldn’t miss. As director Josh Morrison says in his program note, “I would love audiences to experience a debate of faith versus reason in a witty, fun, high and low brow couple of hours.”

Far from being the weighty, skull-numbing diatribe you might imagine when you hear someone say, “Hey, let’s go see a play about faith and reason,” Wittenberg is endlessly entertaining, occasionally poignant and often downright hilarious. Davalos sets his dramatic comedy (or comedic drama) at Wittenberg University in 1517, where Martin Luther (played with genuine pathos and intelligence by Stages’producing artistic director Kenn McLaughlin) slings intellectual arrows with Dr. Faustus (whose manic – often madcap – intensity is brought to life beautifully by Luis Galindo in his Stages debut), sparring not only over the future of the Church and the salvation of souls, but also to win the influence of a young Hamlet. The bringing together of the very real Luther and the imaginary Dr. Faustus and Hamlet proves a deft dramatic device, making for clever wordplay, inside jokes and the occasional Shakespearean banter.

As the philosopher Faustus and the theologian Luther battle over the questions and answers and meaning of life and belief, Hamlet (a wacky Ryan Schabach) bounces between them like a tennis ball. Together the three, helped along by the host of characters brought to life by the diverse and endearing Molly Searcy, careen toward their inevitable destinies of dealmaker with the devil, church reformer and tormented prince. If you know the back story behind any of it, you’ll laugh all the harder; if you don’t, you may be surprised to find yourself hunting down original source material.

Wittenburg will push your boundaries, urge you to question your ideas and make for a marvelously enjoyable couple of hours.

–HOLLY BERETTO
Holly Beretto is delighted to be back in the pages of A+C and looks forward to more prowling on the arts scene.