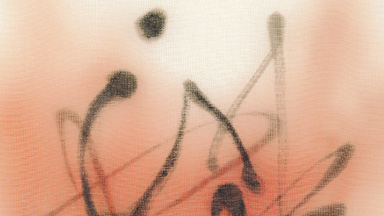 There may be larger exhibitions at the Crow Collection of Asian Art but none will expand your heart more than the works now showing of Chaco Terada. She chose the word “Kotodama” as the title for her small but infinitely impressive show. The name is derived from a combination of Japanese words for “speech” and “soul” and pays homage to her native culture’s notion that spiritual power lives in language. Sometimes this “language power” is called upon to harmonize mind and body to focus upon a specific task; thus, there arises a “spirit meeting.” In her exquisite exhibition, there’s not only a meeting of forces between the artist and the page — there’s also a beautifully attenuated meeting that occurs between her work and the viewer. Terada conveys her own sense of “qi” with nuanced elegance and terrific power.

“Woman of Red Lily V” is a case in point. It’s a beautifully blurred dance, a tiny bit of pinkish wind and quick gesture that makes for a pulse-quickening experience. While it may be meant as an exploration of the spiritual power of words, it expands into a reminder of the old adage that “it’s the soft things that break your bones.” It’s lovely.

Terada learned calligraphy from her father, a renowned Japanese calligrapher who chose to teach her with silence rather than with words. He asked that she watch his gestures, sense his speed and hesitation and understand the nuanced pressure of a brush on paper. More importantly, he taught her to apply her own “tama” or “qi” so that she would produce work that was profoundly revelatory and a “language of the heart.” Well, that’s exactly what Terada has accomplished and it’s so sublimely subtle and gorgeous that it’s almost impossible to bear.

While her calligraphy is stunning, she also brings her marvelously honed sensibility to works in paper and silk. Her photographs, including “White Dream,” are beautifully somnambulistic and are produced on layers of silk. The effect is the visual equivalent of perfect pitch. It’s astonishingly delicate and manages to convey movement. To compare it to lenticular printing would be analogous to talking about oil drills in lieu of surgical implements — but it does give the impression of movement, just as lenticular printing does in a far more coarse way. This is fine work in every sense. It’s so pleasurable to behold that it’s nothing short of a privilege to view it. “Gates V” is another exercise in oneiric wanderings. Go ahead. Let yourself go. I, for one, would happily take up residence in Ms. Terada’s twilight world on a permanent basis. Why exit so much loveliness?