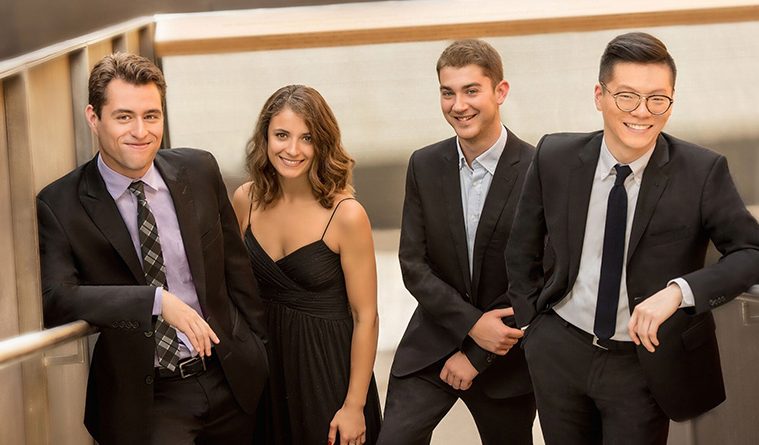 The Dover Quartet, a former quartet-in-residence at Rice University’s Shepherd School of Music, perform on April 9, 2019. Photo courtesy of the artists. 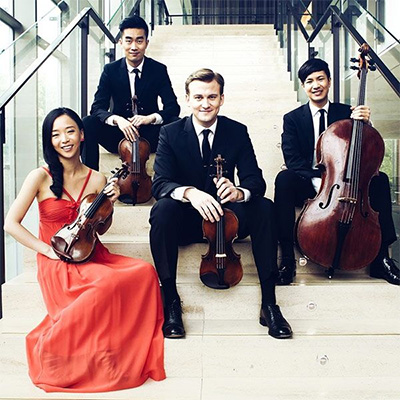 When the Rolston String Quartet first flashed onto Chamber Music Houston’s radar screen, the young ensemble was quartet-in-residence at Rice University’s Shepherd School of Music.   Houston’s longtime chamber-music presenter enlisted the group to perform outreach concerts–useful experience for a budding ensemble. Since then, big things have come to the quartet.

Soon after finishing the Rice program in 2016, the Canadian-born group took first prize at the prestigious Banff International String Quartet Competition–landing $25,000 cash and concert bookings across the United States and Europe. The group has snared other awards, too. So it’s coming back to Stude Hall in style: on Chamber Music Houston’s main concert series in 2018-19.

Kerryn Booth, the chamber series’ executive director, worked with the young musicians when she organized those outreach concerts not so long ago. “I think of them as kids–and when they come back, they’re not kids any more,” Booth says.

Chamber Music Houston’s nine-concert season will put the group amid some of chamber music’s most esteemed names, including the Emerson, American and Jerusalem quartets. The Rolston Quartet’s predecessor at the Shepherd School, the Dover Quartet, also will return. Veteran musician Pinchas Zukerman will appear on the series for his first time. Pianist Jon Kimura Parker of the Shepherd faculty will perform with his Montrose Trio, and a few of his Shepherd colleagues will turn up in cameos with other groups.

For the chamber series’ leaders, planning out each season is a little like three-dimensional chess. Starting a couple of years ahead of time, they have to match up the quartets’ schedules with that of the Shepherd School’s Stude Hall. When the ensembles offer their potential programs, they almost inevitably propose some of the same works, programming chair Ann Fairbanks says. So it takes juggling to prevent duplication.

All the while, the planners have to keep in mind their overall goal: mixing masterworks with items that are less-familiar or new. “We want to make sure that we’re broadening everyone’s horizons,” Booth says. “That’s important. It’s part of what we do.” 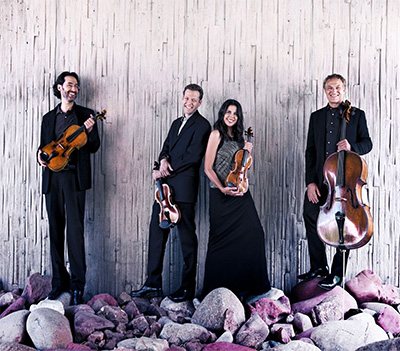 The Pacifica Quartet opens the Chamber Music Season on Sept. 13, 2018.
Photo courtesy of the artists.

That occasionally goes beyond music. The American String Quartet (Nov. 8) will mark its 14th appearance on the series, but it will deliver something new: The quartet will bring along poet and playwright Tom Sleigh for “War and Healing,” Chamber Music Houston’s first program including the spoken word. Sleigh’s readings, drawing on his journalistic experience writing about refugees in the Middle East and Africa, will interweave with music by Bach, Beethoven, Shostakovich and others.

The American Quartet offered the Sleigh collaboration, and “we trust them,” Booth says. Still, she did her homework by listening to Sleigh reading his works online. “He has a beautiful voice,” she says, and his poetry is “very profound. It’s not so you’re going to cry through the whole thing. Some of it has that humor that poets bring. And it’s not so over-your-head that no one is going to get it.”

The Dover Quartet (April 9, 2019) will bring another themed concert. “Love Stories” will feature works inspired by real life, including a Robert Schumann quartet that sprang from his devotion to his wife, Clara. While that’s one of classical music’s most famous romances, Alban Berg’s Lyric Suite grows from an affair that remained secret for 40 years after Berg’s death: Even though he and his wife projected the image of a doting couple, Berg really loved another woman, and he put musical symbols of their affection into the Lyric Suite. (A longtime UT Austin musicology professor, the late Douglass Green, helped bring the truth to light in the 1970s.)

Zukerman and cellist Amanda Forsyth will join the Jerusalem Quartet (Oct. 9) in a program that will embrace the brooding of Arnold Schoenberg’s Transfigured Night and the exuberance of Tchaikovsky’s Souvenir de Florence. The Pacifica Quartet (Sept. 13) will add cellist Desmond Hoebig of the Shepherd School for Franz Schubert’s symphonic-scaled Quintet in C major.

Also stepping up from the Shepherd School, violist Ivo-Jan van der Werff and bassist Timothy Pitts will team up with the Trio con Brio Copenhagen (Feb. 19, 2019) in Schubert’s beloved “Trout” Quintet–which Chamber Music Houston has been trying to program “for at least the last five years,” Booth says. When the group’s board learned that the stars would finally align, “there was applause—cheering.” 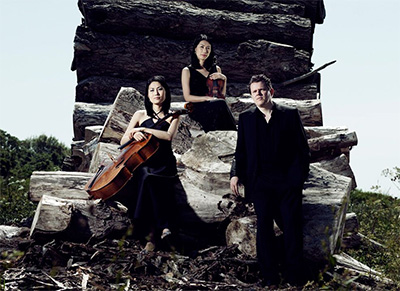 Less-familiar figures will have their moments, too. The Faure  Quartet (March 26, 2019) will perform a work by Vincent d’Indy, a French post-Romantic whose music rarely turns up on this side of the Atlantic. And the Rolston Quartet (Jan. 24, 2019) will feature a fellow Canadian: the venerable R. Murray Schafer, whose Quartet No. 2–subtitled Waves–draws timing and contours from the stirrings of the ocean.

Even when the Rolston players were students at Rice, they were “completely professional,” Booth recalls. “That is so key. … They did have a change during their residency. They changed one of their violinists. That can be a deal-breaker for a young quartet. When you change players, that can kill it. But they came through it just fine.”

Having 2018-19 lined up doesn’t mean Chamber Music Houston can stop thinking. Options are already appearing for the following season, which will include at least two anniversaries.

In 2020, the group will mark its 60th birthday. Its founding in 1960, Fairbanks notes, means the group has been in Houston longer than the Astros or NASA. And 2020 will be the 250th anniversary of an icon’s birth.“I’m beginning to see Beethoven (programs),” Fairbanks says. “We’ll probably get a lot of Beethoven possibilities. Maybe that’ll be an overarching theme.”