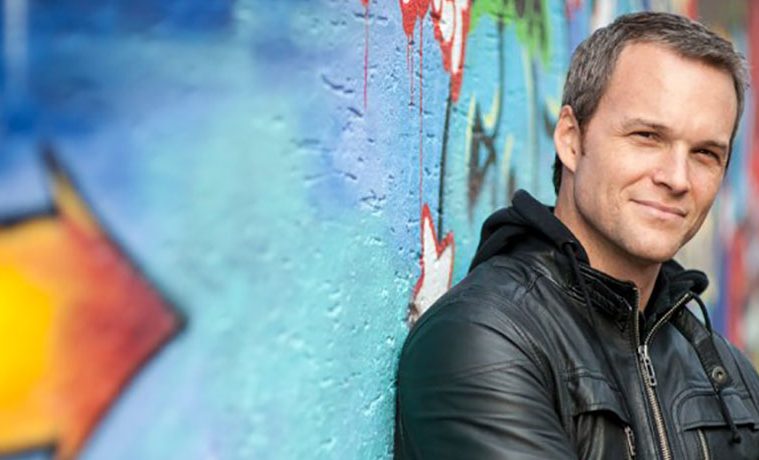 Los Angeles-born and Juilliard-trained baritone Ryan McKinny has made Houston his home. A+C music writer Cortney Jacobs caught up with the rising singer and Houston Grand Opera Studio alum the day before he started rehearsals at HGO for Rigoletto, which runs Jan. 24-Feb. 9.

McKinny continues his HGO roll with Das Rheingold April 11-26, followed by Carmen April 25 – May 10. The yard-work-loving father of two waxed philosophical about the studio, being present, art’s purpose, and his vision for the power of live music to change the world. 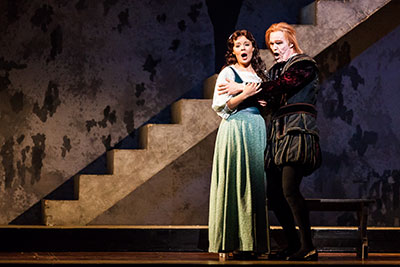 Ryan McKinny: I grew up in Los Angeles. My parents are both classical guitarists and I had a lot of classical music around growing up. After high school, I spent some time at Pasadena City College outside of Los Angeles. I took a voice class at Pasadena City College and a professor there encouraged me to consider a singing career. I ended up transferring to Juilliard.

A+C:  It seems that happens with boys a lot: someone somewhere just hears you guys singing one day and it’s suddenly, “Wow, you should sing opera!”

RM: I don’t want to overstate that. Actually, I wasn’t any good to start with. It’s funny who gets encouraged and who doesn’t, but I’ve since come to the decision that I think that there’s no such thing as talent.

I think that’s kind of a way of labeling people to explain away why some people succeed and some people don’t. If you can have a technique that makes a sound that’s compelling, then I don’t think it matters if you have some amazing instrument. But maybe I’m in the minority with that idea.

A+C:  So what happened between Juilliard and coming to HGO?

RM: I was really interested in doing the Met Young Artist Program, and I was a little disappointed when I didn’t get into that program. But of course, it turned out to be absolutely the best thing that could ever happen to me. My wife and I weren’t sure we wanted to go to Houston at first, but the whole HGO Community just totally embraced us. I found a family here. Houston is home now.

It was also great for my career. I didn’t know what I needed to do yet. I was getting better all the time, but I didn’t understand what repertoire I should sing, and I was making mistakes. I didn’t need the pressure of being on the stage at the Met at that point. Here at Houston Grand Opera there’s an atmosphere of openness in the studio. 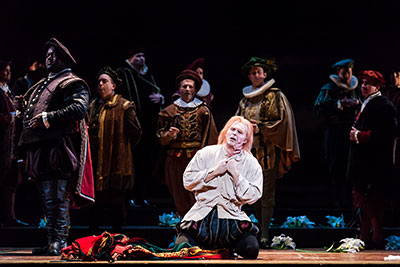 A+C:  Well we’re glad you’re here! And you have your own place now in town, and I understand you even do your own landscaping sometimes. Something about blue plumbagos and red yuccas—how are they doing?

RM: They are alive. Shockingly. We needed to plant some things that we can thoroughly neglect and literally never touch and will still survive. I actually really like doing yard work. But I don’t really get the chance all that often.

A+C:  Well, you should have more time to work in the yard this year with so many HGO shows coming up, so you’ll be home a lot more this year.

RM:  Yes. I’ve been looking forward to this stretch of time for a while now.

A+C:  Looking over your schedule the past couple years one has to wonder how you managed the hectic pace. But it looks like your family travels with you quite a bit.

RM: They do, almost all the time. Which can be kind of crazy, but it’s really wonderful. We home-school my daughter, Emma and we will home-school Louis. And we travel together all the time and it’s kind of crazy with all the logistics of getting a family of four all the places that I go. But I’m super lucky that my wife, Tonya, is even willing to try to do that.

A+C:  So many singers have to choose one or the other, family or career, and so it’s nice that you didn’t have to.

RM: It’s very nice that I didn’t have to. I know a few other singers who do what we do. Most people think we’re insane, and I don’t necessarily dispute that.

A + C: So let’s talk a little bit about what you’ve got coming up. You will be singing Rigoletto this month.

RM: Yes, it’s very exciting. I’ve known for about two and a half years that I was doing this role, and I’ve been working really hard on it because it’s sort of outside of my normal repertoire.

RM:  I’ve sung a lot of dramatic German stuff in the last few years and I haven’t really sung any “Verdi Baritone” roles. It [Rigoletto] fits really well [in my voice], but it’s not something I’ve done a lot of, and it’s considered one of the more difficult roles in the repertoire. 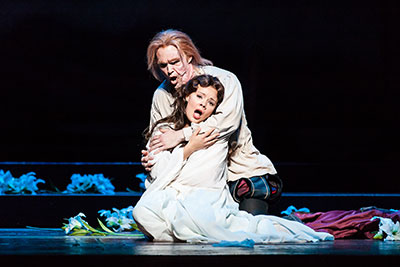 A+C:  You are back at HGO for Das Rheingold April 11-26th. And from what I can gather, the operatic powers that be seemed to know you were headed towards Wagner.

RM:  Well, at some point they did. I really loved Wagner from the time when I first became interested in opera; something about it really connects to me. And so I’d always wanted to sing it but, like I said before, I was not a very good singer. Then about five years ago while in the HGO Studio, I sang the monologue from The Fying Dutchman for Kathleen Kelly and Patrick Summers and that’s how I got the job singing Kurwenal in Tristan and Isolde last season. Since then, little by little, I’ve been making my way with the Wagner repertoire.

A+C:  You’re going to close this season at HGO with Carmen.

RM: I’m actually really excited to do it here because I’ve done about 20 performances of it, all of which were in Germany. I’m excited to get to do it here and do it in a new production, which sounds like it’s going to be really interesting. It is a stress-free cameo where I get to sing the famous tune.

A+C: Everyone loves a Toreador!

A+C: Tell me about your audition experience at the Met. It was actually part of a documentary called The Audition, correct?

RM: That was a really amazing experience, singing on the Met stage for the first time. I remember that very vividly, and it was really wonderful. I just wish I could have enjoyed it a little more. If I could have looked into the future and been able to see that I am going to have a career, I think I could have relaxed a little and just enjoyed it.

A+C:  It’s kind of unique thing. How many people that have auditioned for the Met Council have a video of the experience to show their kids someday?

RM: That’s a good point. I think as more live YouTube recordings become available, people will realize how not every performance is the same and you can’t really make any sort of judgments. Of course, you shouldn’t really be judging it any way. That’s not the point of art, we’re trying to make art that is an experience, and if you’re spending your time making judgments, then you’re not actually experiencing the art. I think it’s our job as performers to do it well enough and convincingly enough that you forget to spend time judging it.

A+C:  Absolutely. And speaking of that creative art experience, after reading the biography of Steve Jobs, you tweeted “The great artists are always screwed up,” which I found funny coming from a great artist. Would you consider yourself screwed up?

RM:  I would certainly say that I have been screwed up. I don’t know if I qualify anymore. But then part of me believes—and here it gets into a big philosophical conversation—maybe we’re all screwed up. I think that to be an artist, you have to really want to say something. And often times, a lot of people who are in the arts need to say something, and came from a place of having had some sort of suffering in their lives.

And some perhaps have an inability to say what they need to say by conventional means. So maybe that’s what I mean by “great artists are always screwed up.”

A+C:  So if you don’t qualify anymore, what changed for you?

RM:  Well it’s still changing. I have children now. My daughter has taught me so much that I didn’t know I needed to learn about actually being in the room with somebody that you love and really being there, and not worrying about yesterday or tomorrow.

But also, there has been a change in my purpose for wanting to be a singer. When I started, I was singing because I wanted to be able to express myself and I wanted people to like me. But I have worked with some really great artists that have taught me that this isn’t about me. It’s about communication between human beings.

A+C:  What do you mean about your “change of purpose?”

RM: I changed my focus—I have this ability to make this amazing art, so, what’s the point? And I think the point might be, that we all get in this room together, and make this music without speakers or anything. You’re sitting in the audience and you hear this person on stage, make this sound from their body that expresses their most pure emotions. And maybe if we hear that from an actual human being, not through speakers or a computer or over Twitter or Facebook, maybe we hear that in real life and maybe that connects us to the other people in the room and maybe then, when we move on in our lives, we are more connected to the people we come in contact with. And we have a little more empathy and a little more compassion, and that tiny little idea makes me think it’s worth it and in some tiny way is changing the way the world is and the way people are.

A+C: One final question: You asked recently why no one had written an opera based on (or with costumes that at least mirror) GWAR, the over-the-top theatrical heavy metal band. If we can get the right people together to write that opera, are you interested in a role?

RM:  Yes. I definitely would be! Any kind of heavy-metal-themed opera really. Although Wagner is already pretty much heavy metal opera to me. What I really want to do is a GWAR Themed Ring Cycle. I think GWAR in fact could be hired to be the director of a Ring Cycle. We will put that out there and maybe someone will pick it up.