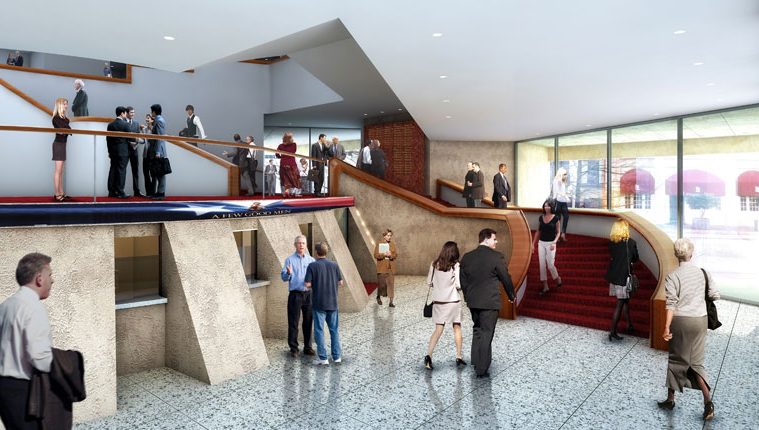 In contrast to Houston’s other major theaters — Jones Hall, The Wortham Center, and The Hobby Center, which are bland, boxy affairs — the Alley Theatre is an utterly memorable building. Originally designed by Ulrich Franzen, its fortress-like exterior is distinguished by the use of sculptural cast-in-place concrete and was described as “neomedieval” at the time of its design. Inside, planes of uninterrupted, rough textured plaster form the surfaces of walls and ceilings. The lyrical flow of the lobby — from the concrete steps that emerge from the sidewalk and fuse with the vortex-like interior space defined by a cascading, red-carpeted stair visually held in place by a thick, sinuous wood handrail — creates one of the magical architectural spaces in Houston.

Unfortunately, the $46.5 million remodeling scheme devised by Pete Ed Garrett of Studio Red Architects — the firm best known for converting the former Rockets basketball arena into a mega-church — threatens to change that, neither preserving the architectural aspects of the building that make it special nor proposing equally visionary substitutions. Rather, it seeks to remake the theater, one of only a dozen Houston buildings honored with a national award from the American Institute of Architects, in a smooth, corporate image.

To be sure, a renovation is both necessary and long overdue. As the region’s flagship theater, the Alley has performed its job admirably for over forty years. However, both the set requirements and backstage equipment have changed a lot in the intervening decades while the building has not. No one can argue against the necessity to keep up with current theatrical demands and the desire to create “a more intimate space where actors and audience are closer,” as artistic director Gregory Boyd promises the renovation will do. The important question is, though, whether Garrett’s design meets the challenge of doing right by both the Alley’s production needs and its architecturally significant building.

When the Alley was built, productions with little to no scenery were in vogue. No more: The current board of directors has authorized a plan to add a 44-foot-tall fly loft clad in metal paneling to the top of the building. This might not be terrible. After all, the Alley survived with its dignity intact after developer Gerald Hines put up a pink, 1,000 car parking garage on the other half of the block in 1984. 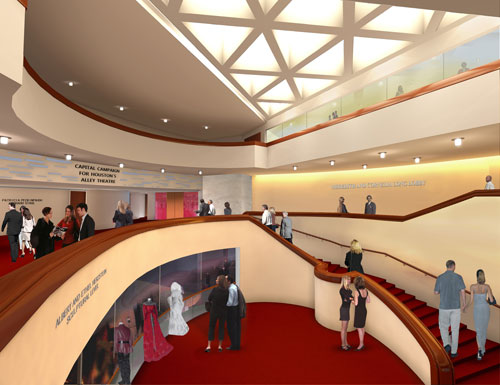 By poking holes in the ceiling and covering parts of the monolithic interior surfaces with wood panels, the unity of materials so carefully conceived by Ulrich Franzen will be muddled. Rendering courtesy Studio Red Architects/Alley Theatre.

Less intrusive methods for introducing scenery to the stage are also being implemented. These include traps under the stage and enlarged wings on either side. However when looking at a plan of the enlarged stage wings, the sight lines for audience members sitting at the extreme left and right sides appear to be nearly parallel with the stage, a situation that does not now exist with the current seating layout. Other changes to the stage that will probably improve it will be to remove two structural columns that sit about two thirds of the way back and to raise and extend the apron further into the seating area so that actors appear to be closer to the audience.

Inside the public lobby resides a mixture of changes that will alter the perception of the space in subtle but significant ways. Some of these changes will no doubt be beneficial, like increasing the number of stalls in the women’s toilet from thirteen to twenty four. Others, however, are more problematic.

At the street-level ticketing lobby, the architects propose to cover the concrete floor with terrazzo. Franzen integrated seemingly opposite sensations of closure and openness in a building with very few windows by cutting out strategic and rather large floor to ceiling openings at the entrance and at the upper level balconies. At these locations only glass screens with the most minimal frames are inserted. To further this intentional ambiguity he continued the concrete of the exterior steps not only on the floor of the lobby but also on the battered surfaces of the banks of ticket booths. The drama of the red carpet cascading down the upper lobby stairs is heighted by the contrast with the humble concrete below. By covering this floor surface, an important part of the design concept will be lost. At the upper level lobby, the balcony facing the parking garage will be enclosed to create a new green-room lounge. Although the street side balcony will remain intact, the physical closure of half the lobby’s connection to the outside will further weaken the tension between interior and exterior space that so animates the building.

In other parts of the lobby, the architects propose to add recessed can lights and round, backlit cutouts in the ceiling as well as wood veneer paneling on sections of the walls and ceilings.  Originally Franzen used plain, rough textured plaster for both wall and ceiling surfaces. This echoes both the mass and texture of the concrete used on the exterior walls.  The lighting is subdued and appears mostly in the form of long, continuous light coves where walls and ceilings meet, thus leaving most of the ceiling surface uninterrupted. These design features help to distinguish this cultural building from its downtown neighbors, which are mostly office towers with bright lighting and visually weightless glass curtain walls. By poking holes in the ceiling and covering parts of the monolithic interior surfaces with wood panels, the unity of materials so carefully conceived by Franzen will be muddled.

These losses won’t be felt just locally, but nationally. The Alley, which opened to great acclaim in 1968, was part a distinguished group of architecturally advanced, experimentally designed regional theaters built in that era’s good economy, often backed with big Ford Foundation grants. Of its siblings, only the Alley Theatre has survived in its original form and use.

The Arena Stage in Washington, D.C. (1961), designed by Harry Weese, was literally encased in a new addition by Vancouver BC architect Bing Thom in 2010.  The Tyrone Guthrie Theater in Minneapolis (1963) designed by Ralph Rapson was demolished and replaced by a new theater designed by French architect Jean Nouvel in 2006. The Morris A. Mechanic Theater in Baltimore (1967), designed by John M. Johanson, sits vacant after a much larger, former Vaudeville theater a few blocks away was rehabilitated in 2004. And the Mummers Theater in Oklahoma City of 1970, also designed by Johanson is vacant following flooding in 2010.

When the board of directors at the Guthrie Theater decided to replace it, they hired a visionary architect, one who was probably better than the original:  Jean Nouvel would go on to win the Pritzker Prize, the equivalent of the Nobel Prize for architecture, two years after its completion.

In the absence of an architect of exceptional merit, one would hope the Alley would instead embark on a very careful and conservative restoration of the original features that make it such significant work of architecture. An example perhaps to study would be Josep Llinás’ loving, almost archeological rehabilitation of the Metropol Theater in the mid-1990s, an exuberant example of Catalan Art Nouveau originally designed by Josep Maria Jujol in 1908 in Tarragona, Spain. There, Llinás trod with a very light step as he labored to correct mistakes and bring the theater up to date, all with great sensitivity to the architectural design.

Fortunately, the Alley has invited the public to offer ideas for improving the renovation, which is to be funded by a capital campaign that will include $16.5 million for the endowment and cash reserves as well as $10 million to fund the artistic mission, at alleytheatre.org/ideas. So far about $31 million of the $73 million campaign goal has been raised. Houstonians who love great architecture as much as they love great theater should urge its directors to consider revisions to the current renovation component of the Alley’s “Extended Engagement” campaign.

Whatever one thinks of civic boosters’ plans to lure cultural tourists, Franzen’s Alley Theatre now stands as a truly distinctive, only-in-Houston architectural experience. Now’s the time to make sure we keep it that way.

—BEN KOUSH
Ben Koush is an architect in Houston. He writes for Cite Magazine and Texas Architect.