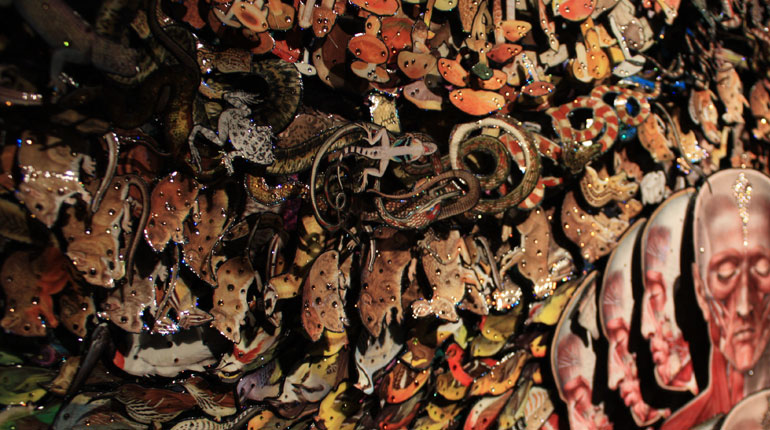 ‘Round 7’ at Lawndale Art Center

Why do we copy? Why do we appropriate imagery? Is it inherently different from the source? Perhaps these questions aren’t all asked overtly or even consciously in the Round 7 Lawndale Artist Studio Program Exhibition, but these themes percolate when considering the three artists together. The exhibition features work from DOMOKOS/FUTURE BLONDES 0.0.0.0., a self-described nomadic psychedelic techno-noise network centered on artist Domokos Benczeal, video artist Nancy Douthey, and Patrick Turk, maker of mind-melting collage assemblages.

Benczeal’s is perhaps the most perplexing, least accessible work. Benczeal’s visual-arts work started with collage-based gig posters for his performances. At Lawndale, he’s branched out into installation, gathering artifacts from the life and mind of an underground musician. There is a ritualistic, quasi-spiritual current running through the work, with a desire to commune with the eternal.

In Sioux Dance, the artist created a shrine to music that bleeds into the exhibition space. In stark black and white, Benczeal creates a barrier of salt chlorinator unit covers on the floor to demarcate a stage-like space. Against the wall is an altar-like structure with large Pioneer speakers painted white and stacked with audio equipment. A blown-up 5’x8′ collage print rests against the back wall, along with other countercultural bric-a-brac. Just outside the chlorinator cover barrier, thick movable walls frame the stage space, and a broken mirror rests in front of it all.

Benczeal’s video work vibrates along the adjacent wall. Designed to accompany the sounds of FUTURE BLONDES 0.0.0.0., the videos are similar to the music: highly sampled, altered to the point of corruption, and aesthetically disruptive. Black-and-white stripes flash and crawl along some human-like shapes. The sensation is intentionally too difficult for the eye to bear for extended periods, creating great discomfort. While all of the alteration and resampling of images, matter, and video creates new letterforms, juxtapositions, and strange sensations, the spiritual aspect feels lost. Perhaps by bringing this into the exhibition setting, these artifacts lose spiritual power and remain artifacts alone. Or is this approach to copying and appropriation analogous to gesture and action in painting during the 1940s and 50s? Perhaps the spirit is in the act of image- making itself.

Patrick Turk’s book-image assemblages are a little easier to follow. Turk describes the idea for these collages as a fantasy of returning to Earth from an extended time away and finding a single inhabitant: the superorganism. Composed of all life on Earth, the superorganism is linked not only physically, but psychically: Each part retains its autonomy, but also becomes part of this planet-sized organism, like a school of fish.

Turk uses a labor-intensive process of manually cutting book images and sealing them with acrylic medium. Differing from traditional collage, the artist does not mount the images to a receiving sheet, but instead inserts little stilts of variable length behind each image, creating depth and shadows in the layers. The artist includes a wide variety of flora and fauna interspersed with human anatomical drawings. He repeats forms to create a rhythm of circulating organisms, like an ocean current with the organisms acting fluidly.

The artist sources individual images from books, and does not replicate the images. Instead, Turk’s repeated images are cut from different copies of the same book. The limited approach to exclusively physical appropriation, without actual duplication, shows a valuation of his source materials.

In contrast, Nancy Douthey contributes video work that plays with tension, memory, and longing. The Fireplace (Not to be Reproduced) meditates on the idea of copies without relying on appropriation of outside materials. The video juxtaposes two video feeds of the same subject filmed from the same tripod at the same angle at different times: Douthey’s back. She stands near a window and the sunlight leaves a hard line along her head and shoulder. However, the two video feeds are not exactly the same: people wobble in space as they stand, or scratch their heads as they become restless. The sun changes the quantity and color of light as it moves lower in the sky. We are led to understand that perfect reproductions don’t exist, only copies.

While answers rarely come easy in contemporary art, Round 7 drops the viewer into a subtle conversation about the distinctions between replication and appropriation.