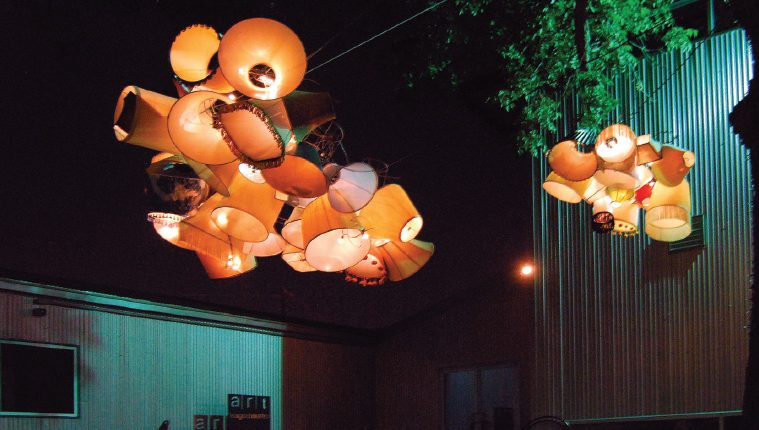 WOULD YOU ATTEND YOUR OWN funeral? Would you let a stranger wash your hair? Would you put your art in the fridge? Consider also four-hour artist mini-residencies that run ’round the clock, an annual event showcasing “rejected” artwork, and an explosive performance biennale.

The city’s alternative art scene allows for seemingly outrageous scenarios like these to take place while fostering consistent enthusiastic participation from diverse artists and audiences. Much of what makes this vibrant scene sustainable is the fact that it does not align itself strictly in opposition to more subdued mainstream art activity. Rather, the artists hold steady in their alternative approach to art and exhibition-making while often working in tandem with, or in response to, major museums and commercial galleries.

The imaginative self-proclaimed “internationally unknown artist” Emily Sloan is at the center of the operation. Included in her long list of current and upcoming activities is the Lone Star Performance Explosion, set to debut in Houston this March, during which she will do a performance inspired by the infamous hatchet-wielding abolition-supporting radical Carrie A. Nation. And this summer, Sloan will be artist-in-residence at a not-so-alternative venue, Darke Gallery, explaining that she loves the idea of a commercial art venue creating an alternative use for their exhibition space. During her one-month residency, she will work on site, hold open-studio hours, and receive visitors.

Yet, as a University of Houston graduate art student studying sculpture, Sloan grew accustomed to operating on the fringes, explaining,

“My initial introduction to much of Houston was through my time at UH. My studio was in the sculpture building, located off the main campus — an alternative place in its own right where the graduate students basically had run of the place. I also became involved with the Cynthia Woods Mitchell Center for the Arts, taking a participatory art class taught by artist and curator Andrea Grover.”

Sloan’s friendships and activities stemming from that environment taught her to “make what you have into something more. Or make something else.” During her six years in Houston, she has produced numerous liminal site-specific projects such as the “Burning House,” on highway 59N in East Texas; “To Whom it May Concern,” on a vacant lot surface in Houston; “Sabine Street Bridge Lamp” on Buffalo Bayou; and “ShadeCloud” at Art League Houston.

Her performance work includes “Funeral for the Living,” which took place in a rented church in the Houston Heights neighborhood and incorporated deaconess participants from her prior involvement with the School of Latitudes at labotanica; “Rebirth” at El Rincon Social where a truck bed filled with blessed fluid served as a burial/baptism site, allowing participants to be “reborn”; “Napping Affects Performance,” providing community naps in collaboration with various performances for six weeks at Art League Houston; and the “Southern Naptist Convention” at 14 Pews, appropriating Evangelical scare tactics with language such as “Don’t get left awake during the napture.”

“Houston’s alternative art activity is definitely a full-fledged scene,” says Sloan. “You could attend only these events and visit only these places and still have a full calendar packed with rich experiences.”

Sloan’s ongoing mobile project, “The Kenmore,” is a small, self-run exhibition object with a mission to “keep ideas fresh” by inviting artists and curators to collaborate with a refrigerator (insert other clever descriptors: “it’s cool,” “not just another white cube,” etc.)

The Kenmore will participate in FotoFest with “Refrigerator Art” curated by David Mc- Clain and on view at Skydive – yet another fringe art venue gem with its focus on bringing art projects outside of Texas to Houston.

Her additional FotoFest involvement includes curating a performance and exhibition of photos by Kristy Peet and Brit Ragsdale to be held at Gallery 1724, Contemporary Art Salon. However, Sloan warns that this much creative activity can take its toll. For example, in the months following “Funeral for the Living,” she would wake up in the night with an acute awareness of her own mortal end. But with the tender connections she’s made with strangers while washing their hair during her performance project “Wash,” as well as a much needed retreat during her bathtub Many Mini residency, she finds a way to buoy herself.

— NANCY ZASTUDIL
Nancy Zastudil is an itinerant curator who now looks in her fridge with an enlightened perspective.