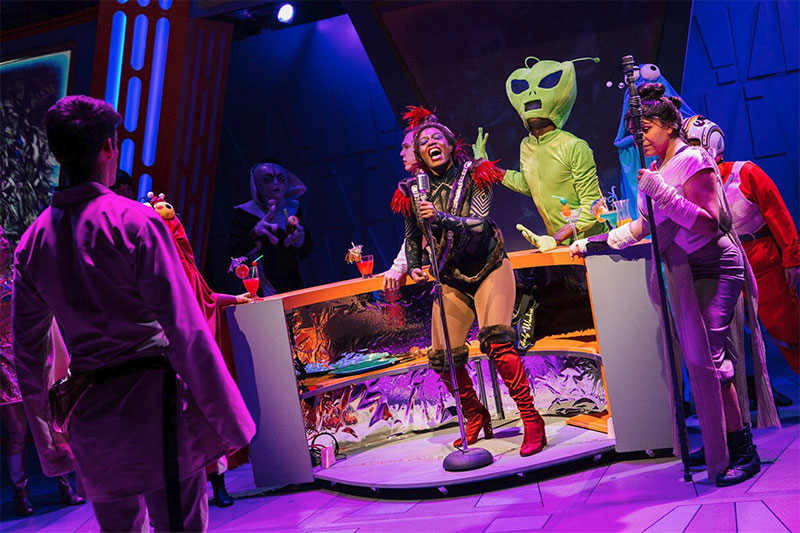 If you are familiar with a certain popular space franchise enjoying a reboot right now, you might see some similarities with this years Panto at Stages Repertory Theatre, which promises to take us to a galaxy far, far away. Stages Artistic Director Kenn McLaughlin returns to direct this years Panto Star Force, through Dec. 30, but has turned over the writing reigns to Panto veteran Ryan Schabach (you will remember him as the beloved Buttons from previous Pantos) and playwright Elizabeth A.M. Keel.

I met with Schabach and Keel at a cafe to talk about the show, where our waiter turned out to be an actor and a Panto veteran from several years ago, because of course he was.

Schabach has worked on Stages Pantos since the beginning in 2008, and directed the 2012 Panto Mother Goose, but has been itching to get in the writing room since almost day one. Like so many good stories, his path to Panto playwright began in the men’s restroom when he casually mentioned to McLaughlin he’d like to sit in on the writing room if possible.

Keel’s story doesn’t start in the men’s restroom, thankfully, but with a humble sandwich. After teaching for seven years at Stages Young Artists Conservatory and moonlighting periodically at the box office, McLaughlin walked by while Keel was eating a sandwich and asked if she was “into Star Wars.” The rest is history.

Writing this play is special for both playwrights. Keel recently received her MA in Theatre Studies from the University of Houston and wrote her thesis on science fiction in theater, researching and exploring how theater can seriously approach science fiction and lean into adult’s imagination.

“Now (I laugh at the irony), Ryan and I are working on this Panto. And it’s playful!” Keel says. “It’s bursting at the seams with incredible design, zany props and costumes, songs and fancy lights. It’s ever so childlike; so rich in those what-ifs which are necessary to sci-fi as well as the British Panto tradition. What if we could fire up a hyperdrive? What if there was a monster in that swamp?”

Schabach has been involved with Stages Panto’s from day one, and has a special relationship with his character Buttons, the audience, and the form.

“Performing the role of Buttons has been one of the greatest joys of my life for over ten years” he says, “and I want to give back to that tradition and add to its rich history at Stages. I feel the community connection every performance and look forward to connecting with patrons who have become my friends and treated me like family throughout the decade.”

Listening to Schabach’s stories of interacting with young theatre-goers often seeing a play for the first time, watching them grow up over the years, and even recently meeting the children of those first young patrons is truly heartwarming, and I can see what this tradition means to him.

There is a decent sized British community in Houston that do actually turn up every year to get a little taste of home, so the creative team has to bear in mind that there will be a few experts in the audience to keep them on their toes. Panto traditions include sing alongs, slapstick comedy, catch phrases, and are generally written based on fairy tales. Keel and Schabach both agree that science fiction stories easily fit into the fairy tale genre and translate well to the Panto tradition.

“With fairytales, you get to struggle through all the dangerous bits by finding the friends and enemies who can help you become the person you are meant to be. That spirit feeds perfectly into Panto: it takes all of us, from Buttons and the zany characters to the entire audience, to help complete the hero’s journey,” Keel explains.

Keel and Schabach both love the spacey source material and want to write for every level of fan. “Panto Star Force caters to the child within all of us. The super space fan will enjoy the easter eggs that show the depth of storytelling, the four year old will cheer along with our heroes and boo the villains,” says Schabach.

Panto is also well known for its timely cultural references, so you can expect to be familiar with newsworthy references, both nationally and locally. All of the planets in Panto Star Force are named after Houston suburbs (pretty sure we can all agree what planet, or should I say moon, The Woodlands should be) and during previous years on Sundays, Buttons would update the audience with the Houston Texans score if they were playing at the same time as the matinee.

Play is a huge factor in Panto, and Keel points out that they will be playing with the child in all of us.

“Kids are the flat out best at imagination games, and because of that, I would argue that makes them experts on traversing new galaxies,” Keel says. “They’re quicker to ‘go there’ in their hearts and minds.”

But someone has to bring those kids to the theater and the playwrights won’t forget about the parents either (or the fun loving aunts, older brothers, or childless space nerds).

“This is the time of year for the grown ups to indulge in reminding ourselves that we are still children inside,” adds Keel. “We have retained that what-if skill set. Come fly in space with us. Feel feelings. Sing loudly. Eat popcorn and boo the baddies. This isn’t a play; it’s an epic adventure, and it won’t be the same without you.”