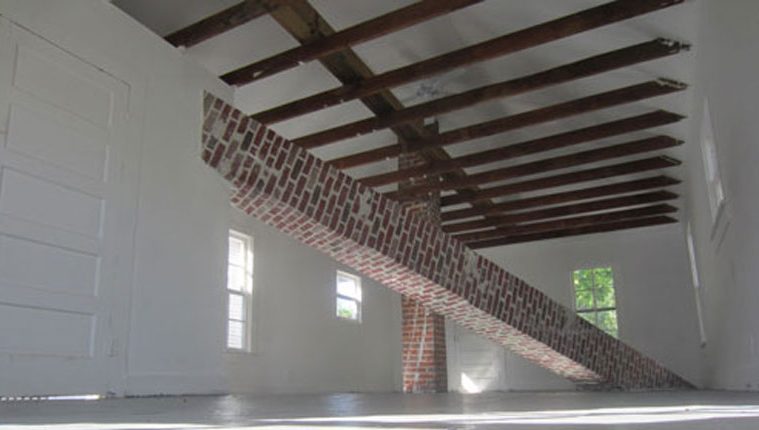 Rarely does such a potentially disruptive, capsule even violent architectural intervention feel as organic and sensitive as Canadian-born, click Los Angeles-based artist Sean Shim-Boyle’s response to one of the historic Holman Street shotgun houses in Project Row Houses’ Round 38.

Reacting to the structure’s chimney, which intersects with the vaulted ceiling’s wooden crossbeams, Shim-Boyle dramatically, yet somehow gently, interrupts the interior with a convincing replica of the chimney – the dummy’s bricks aren’t real, but the mortar is – that thrusts diagonally from a rear corner of the house to a point just below the beams on a narrow wall near the front.

The criss-crossing lines created by the chimneys, the beams, the windows and shadows give seemingly every vantage point an enchanting division of spaces that cries out for a viewfinder. (Bring a camera. It’s almost impossible to take a dull photograph of Shim-Boyle’s installation.)

In some respects, the installation is even more photogenic after dark, when it’s not on view, thanks to Shim-Boyle’s other alteration, an incision in the floor – aligned with the diagonal chimney – into which he’s inserted a pair of fluorescent light bulbs. This Dan Flavin-esque touch illuminates the house at night, as a photo album on the Facebook page for LAXART, Shim-Boyle’s Los Angeles gallery, reveals; during the day, the white line is contained, its impact more subtle.

The title refers to the salt-like properties of the chimneys’ surface, though Shim-Boyle’s artspeak-clogged statement says it “also alludes to memories of commerce and domesticity – preservation of food – expanding outwardly to religion (Lot’s wife), and myth and luck (throwing salt over the shoulder) among others.” I’m not sure the title performs that much heavy lifting; if anything, I see more of a Sodom reference in the faux chimney’s phallic thrust than in the mention of salt.

At any rate, it doesn’t need to, since Shim-Boyle’s installation more than speaks for itself. Still, his expressed desire “that phenomenological notions” – presumably referring to architectural design currents that emphasize subjectivity and how building materials are experienced – “might become more magical” finds fulfillment in this spare yet ambitious installation, which is as striking for its tenderness as for its elegant execution.