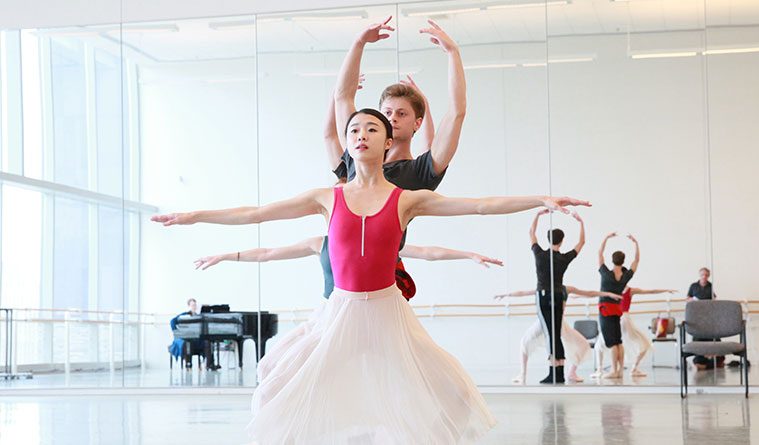 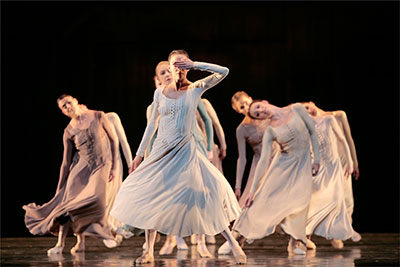 Stanton Welch talks about music as though it’s a visual art. Indeed, this is how the artistic director of Houston Ballet conceives choreography in his mind’s eye: He “sees” the physical possibilities in the auditory experience. To Welch, the selection of music is both fundamental and crucial when developing a new ballet.  And that’s the through-line of Morris, Welch & Kylián, Houston Ballet’s three-piece mixed repertory program running May 28 – June 7 at the Wortham Theater Center in downtown Houston.

The program boasts world premieres by celebrated American choreographer Mark Morris and Houston Ballet artistic director Welch, along with a revival of a work by Jiří Kylián, the Czech-born former artistic director of Netherlands Dance Theater. Each of these choreographers has a strong sense of musicality; when their pieces are placed on the same bill, one can expect nothing less than an inspired evening of choreography, realized by Houston Ballet’s powerful dancers. 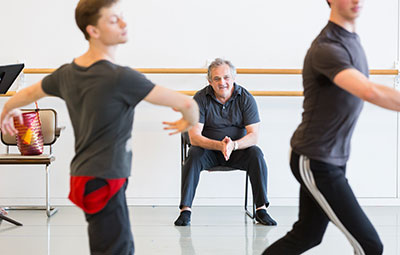 Morris’ The Letter V will not only have its world premiere in Houston, but is also the first Morris piece commissioned by Houston Ballet. Welch has counted himself a fan of Morris’ work since moving to the U.S. from his native Australia in the mid-1980s to attend the San Francisco Ballet School.

“[Morris] was working as a choreographer at San Francisco Ballet School right after I arrived,” explained Welch. “I felt very connected to his work. Musically, his work is just beautiful, which is very important to me. Because of that, there is a freedom and a joy to the dancing. His musicality is really, really strong.”

Morris, Welch noted, has “a great love of classical ballet,” but it is his ability to blend the ballet vocabulary with modern, postmodern and folk-dance movement that has earned him his reputation as one of the most successful and influential choreographers alive.

The Letter V is an ensemble work for which the women don pointe shoes, and is set to Joseph Haydn’s classical Symphony No. 8, one the composer’s best-known works. The real magic of the piece lies in the way Morris tweaks the traditional, carving out moments of surprise that lead to awe. 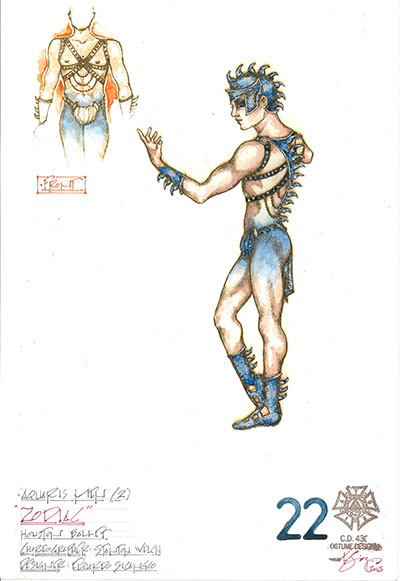 Welch’s world premiere, Zodiac, involves another commission: A new score by Australian composer Ross Edwards. “I had wanted to do a commissioned score for a while,” said Welch. “It’s for full orchestra. I knew the orchestra would love it, because it’s very symphonic.” Zodiac is an ensemble piece for 36 dancers divided into 12 movements, one for each of the 12 signs of the Greek Zodiac. “The score is extremely contrasting. It goes through the 12 signs, capturing the mood and feeling of each of characters…[To develop the choreography] I reacted to what Ross did with the score,” said Welch.

Before beginning the choreography, Welch read the mythology behind the star signs. The resulting ballet is very much rooted in those stories, which yielded some surprising results. As an example, Welch mentions the bull, Taurus: “We think of him as savage and rough normally, but in the actual mythology, he is gentle,sexual and loving. The music reflects this.”

Costume designer Eduardo Sicangco developed the “armory aesthetic” of the garb, which channels Greek warriors, complete with gladiator helmets. The costumes are set in a star-ridden scenic design with constellations, two moons and a planetary eclipse. The lighting is absolutely crucial to submersing the audience in the realm of the Heavens. “The view from where you sit in the audience creates the look,” said Welch, who noted that the confluence of scenic design elements and lighting will present a unique image to each audience member.  “Every country and every part of the world has a very similar format for the Zodiac—they’re all 12 signs. I like the universal nature of it,” said Welch. 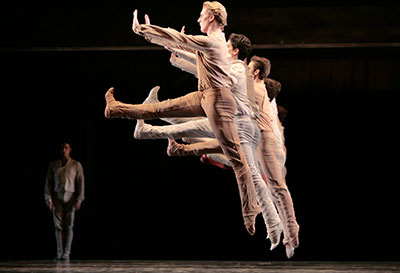 Welch’s decision to include a Kylián work as the third piece to round out the evening was an easy one. Svadebka (1982), Russian for “wedding,” is one of Welch’s “favorite ballets of all time.” “You’re watching this very intense ceremony, this traditional Russian peasant wedding. We see the bride and groom meet for the first time and we’re present for their consummation of the marriage,” said Welch, who first saw Svadebka on video when he was in his late teens before he’d even moved to the U.S. He fell in love not just with this particular ballet, but with the way Kylián’s choreography interfaces with the music. It wasn’t until 2007 that Welch finally saw the piece live, when Houston Ballet performed it, just four years after Welch joined the company as artistic director.

Svadebka follows eight couples as they prepare for a wedding—the bride and groom, the matchmakers, and several pairs of relatives. The costuming is abstract—you won’t find a bridal dress and tuxedo here—and the music is Igor Stravinsky’s Les Noces, appropriately a cantata about a peasant wedding. The music was first commissioned by the Russian impresario Serge Diaghilev to create a new work for his company the Ballet Russes; in 1923, Bronislava Nijinska created the ballet, also titled Les Noces.

Kylián’s Svadebka is a reinterpretation of the original ballet, though equally tied to the music: “He makes you see the music,” said Welch, citing this as one of the reasons Kylián is such a sought-after choreographer.

Ultimately, Morris, Welch & Kylián is program of works that approaches ballet from very different perspectives. But while the dances will be thematically and physically diverse, the three choreographers, each from a different far-flung place on the world map, share one basic love: that for music.