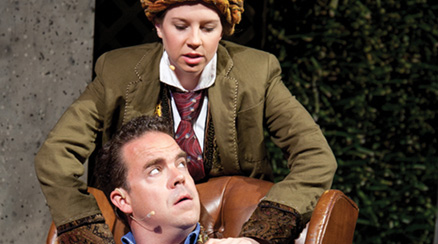 A shot from Twelfth Night.

For a playwright from the 16th century, ailment William Shakespeare has a pretty good track record. Theater companies around the world have performed the 37 plays officially attributed to him for more than 400 years, ailment and enthusiasm and appetite for his plays has yet to falter.

Nevertheless, the Bard’s relevance to contemporary culture is a question that actors and directors are forced to consider every time they take to the boards with one of his plays. Shakespearean language is not only dense, but also antiquated; and staging his work can present numerous logistical and financial difficulties.

Shakespeare Dallas artistic director Raphael Parry has been rising to these challenges since 2002. That was the year he first joined the company, which is a direct descendant of the free Shakespeare movement that began in New York in the 1950s. Respecting the Bard’s words and linguistic rhythms — his “music” — is a prime directive for Parry, although he does admit to substituting more modern words for those that audiences would likely not understand.

“We stick to his text 99 percent of the time and only change words if we feel it adds clarity,” says the artistic director. “[Otherwise], his verse structure (iambic pentameter) is almost universal — African poetry comes in that rhythm, so does French Alexandrine verse.”

Keeping Shakespeare part of the ongoing cultural conversation also means carefully choosing which plays to stage in a given year and walking an interpretive tightrope between past and present.

“We try to react to what we feel is a need in the community or a response to the current happenings of our universe,” Parry says. “So I try to take a popular play like Twelfth Night and balance it with one that’s very rarely seen like Coriolanus. And that’s part of the reason for pairing these two plays this year.”

Twelfth Night is a perennial favorite not only because it’s a battle-of-the-sexes farce, but also because it deals with love in its many guises: romance, passion, lust, jealousy and even narcissism. Coriolanus, on the other hand, is a play in the vein of the more well-known Julius Caesar that deals with power, politics and one man’s ruthless ambition.

“Because this is an election year and [because of] the ongoing conflicts in Afghanistan and Iraq, it struck us that it would be interesting to do a play about somebody who is a military power and also a political one as well,” Parry explains. It’s a great tragedy that’s also great drama.”

Shakespeare Dallas will perform both Coriolanus and Twelfth Night at the Samuell-Grand Amphitheatre until July 13. In September and October, the company will stage Macbeth at Samuell-Grand and then Addison Circle Park.

The choice to do a second tragedy to conclude the 2012 season was equally deliberate. Macbeth is required reading in many Texas high schools; and to perform it at the start of the academic year would give young people a chance to see a professional rendering of the play.

“I [also] think it’s interesting to do [Macbeth] in the fall because you get all that darkness,” Parry adds. “Doing the play in the summer always has the witches and ghost walking in light. And [darkness] adds a lot more ambiance.”

Of the three plays the company will be doing, only one, Coriolanus, is set according to period (ancient Rome). Twelfth Night is set circa 1910 in Dubrovnik, Croatia, which, like the original Illyria, is on the east coast of the Adriatic.

Macbeth will likely be set somewhere in the Middle East. Like Coriolanus, its purpose will be to cast current events into Shakespearean relief.

“[Macbeth is about] power struggles and how independent people can take control and rule. It’s also about the chaos that ensues when power goes away. So it really resonates with things that going on currently,” says Parry.

He definitely has his work cut out for him. As an outdoor theater company, Shakespeare Dallas strives to appeal to as broad a spectrum of theatergoers as possible in a non-traditional setting while at the same time bringing in new audiences—not an easy task.

As Lance Lusk, a theater critic for D Magazine explains, “If you have audiences who into it not understanding the foundation — the play in and of itself — they can be distracted.”

Then there’s the nature of the venues in which Shakespeare Dallas performs. While outdoor settings do offer a more relaxed environment than regular theaters, they — and more specifically, what goes on in them — can compete for audience attention.

“[Plays] almost become background music for things like the wine, the picnics and the beach balls and people taking naps,” remarks Lusk.

And inevitably, in trying to reach the broadest audience possible, the expectations of some theatergoers won’t always be met.

“We get dozens of letters a year from patrons saying how upset they were with me because I wouldn’t put Shakespeare in the appropriate sixteenth century time period. But even he was doing the plays [including his more historical ones] in contemporary clothes,” says Parry.

These issues become especially problematic when technology gets thrown into the mix. Electronic devices and practices such as tweeting and text-messaging have not only changed how and where individuals communicate. They’ve also changed how some people — and in particular, the young — understand interpersonal interaction and respond to it in context of live dramatic performances, no matter the venue involved.

“The human element that’s involved should be enough to pierce that bubble of electronic selfishness and thinking that you are an avatar in a giant virtual reality game,” Lusk says. “But the attitude is that, yes, live people are on stage, but what does it matter to me?”

Yet for the challenges Parry and other directors of Shakespeare face, the Bard’s plays are surviving the current cultural moment and even thriving. Older generations that have been exposed to Shakespeare are transmitting their love of his work to others, a trend that makes SMU theater arts professor Michael Connolly hopeful.

“Intelligent people or people who are moved by [classical plays are] making sure that they bring their children or their friends to [performances] to see whether or not there’s something that excites them [in those works],” he says.

That human beings haven’t changed much over the last four centuries also helps.

“As long as we continue to recognize the humanity of the individuals who comprise Shakespeare’s personalities,” continues Connolly, “then we’ll continue to go back to these plays and wrestle with how to make them come alive.”