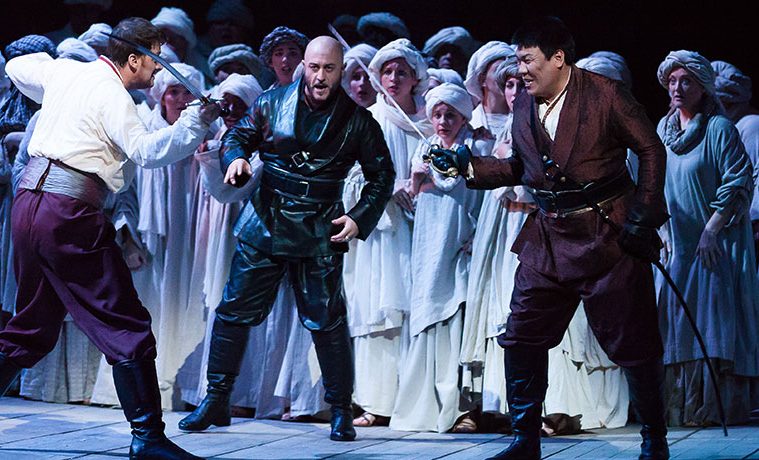 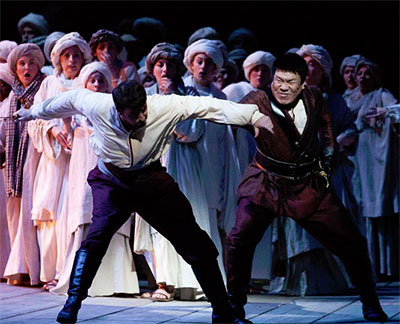 When Otello hurls Iago across the stage in Houston Grand Opera’s riveting production of Otello, through Nov. 7, we feel the full power of the Moor’s anger. We also know that Iago will stand up, and be perfectly fine to sing the next two acts. Such is the magic of stage combat.

Leraldo Anzaldua, a UH alum and Pasadena, Texas native, is currently the fight director for Otello, one of Verdi’s late, but most celebrated operas. It requires a good deal of physical conflict to convey Shakespeare’s iconic tale of doomed jealousy. You might say that Otello has an anger management problem.

When I first Anzaldua, he was in the middle of a rumble with a gang of angry men. I thought I had accidentally walked into a scene from West Side Story. Even though it was “fake” fighting, I felt slightly traumatized. I was visiting Brian Byrnes’ stage combat at University of Houston when I observed Anzaldua in action.  As the hour wore on, I could tell no one was getting hurt, but the experience made me curious about the inside world of stage combat.

In addition to HGO, Anzaldua has worked with Houston Shakespeare Festival, Main Street Theater, Stages Repertory Theatre and the Alley Theare. Since Byrnes left Houston, Anzaldua has become the city’s go to guy for stage combat. Thus far, he has been fight director for six HGO productions and a performer in 12 shows. 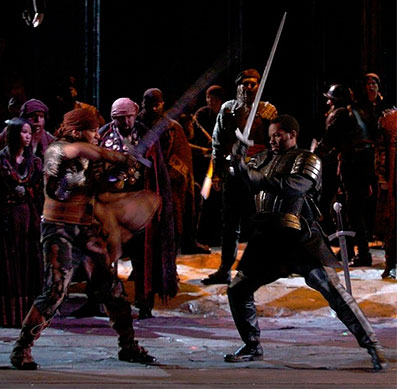 Stage combat is a very particular theatrical practice. “I tell my class, ‘go for the dramatic effect,’” says Anzaldua. “It needs to believable, and you want the audience with you every minute. But safety is also involved. Stage combat is most effective when drama and safety live in harmony.” And I remember that exact feeling watching him in action. I knew it wasn’t real, but it was so visceral. Anzaldua goes on to explain the process further. “We want the audience centered on the character not the actor. They should never be concerned about the safety of an actor. It’s a fine line. You want the audience to be at the edge of their seat, not calling the doctor.”

Anzaldua finds Otello a terrific opera for his considerable talents. As he acted in the play at Houston Shakespeare Festival a few years back, he’s deeply familiar with the text. Plus, there’s a nice balance of sword play and unarmed combat, which requires a different kind of choreography. “With unarmed combat, there is an element of illusion, much in the way of how a magic trick works, but you want to minimize the amount of things you have to hide to make it feel real and natural. The audience catches up with you.”

Fight choreography for an opera is somewhat different than for a stage play. Although artists rarely have to sing and swing, the musicality is crucial to the overall effect. “Every movement is dictated by the music,” Anzaldua explains. “The choreography must hit certain points in the music. Verdi’s score is like movie score: the low tones are suspenseful, while the high tones add excitement. In this case, the libretto also offers direction. This opera is so well scored for physicality.” 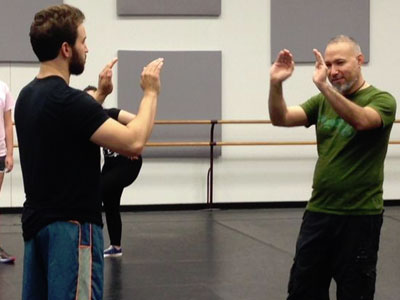 The choreographer is always thrilled to be working with HGO artists. “The days of ‘parking and barking’ are over. Today’s singers are much more physical, and often trained in some form of stage combat, which allows me to create choreography that is really challenging. There is a new generation of singers working now, and these performers are amazing. It’s truly a conversation between performers and storytellers. We are trying to tell the same story as exciting as possible. It’s very collaborative.”

Anzaldua sees his role as crucial in creating a compelling piece of theater. “It’s Important to have fight scenes as part of this opera to show how volatile the characters become. As human beings with emotions rolling through us, we try to remain civilized, to negotiate all our interactions between others. When a situation with a person may come along where words no longer work, and the only thing left is physicality, it is our job as a storyteller to show that part of the tale in an exciting and visceral way.”