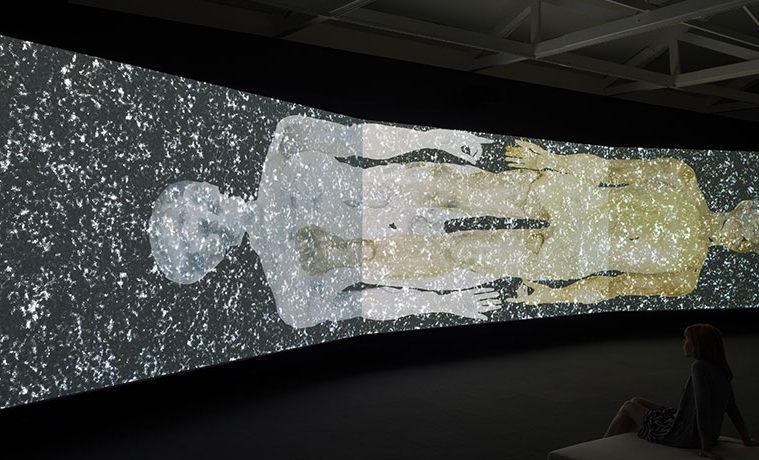 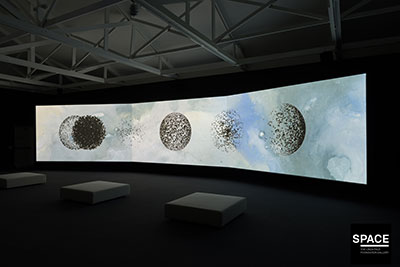 Commissioned for the 2013 Biennial in Sharjah, one of the United Arab Emirates states on the Arabian Peninsula, Shahzia Sikander’s Parallax is a complex, shifting, morphing, evolving, abstract, animated meditation on centuries of global competition for natural resources, the history of maritime trade, foreign control of the Strait of Hormuz during the colonial era and the dramatic conflicts today over the hotly contested strait where 35 percent of the world’s petroleum shipped by sea passes.

With aerial views of the strait drawn from 17th and 18th-century maps, swarming microbe-like forms, a map of the United States with Texas plainly visible, oil gushing from rock formations, locust-like red-white-and-blue arms and shattering Christmas trees, Sikander’s panoramic, three-channel HD single-image video is based on hundreds of small drawings derived from the tradition of Indo-Persian miniature painting that have been digitally animated, accompanied by music by the Chinese-born composer Du Yun and the voices of three local poets from Sharjah, who recite in Arabic.

Making its United States debut at the Linda Pace Foundation, Parallax marks Sikander’s return to San Antonio where she first began experimenting with animation in 2001 as an International Artist in Residence at Artpace. Presented as a widescreen projection through March 7, 2015, the video is a new acquisition by the Pace Foundation.

“When I made my first animation at Artpace, I was working with very crude technology, a simple desk-top program,” Sikander says. “But as I learned more about it, my techniques have improved and now I work with professionals who know all about making animations. I have a much better understanding of big projection and movement. I try to pull as much out of a drawing as I can. I know a drawing can be altered quite a lot when you blow it up from 3 inches to 60 feet.”

In her first video, Intimacy, Sikander recorded her step-by-step process for making a painting by building up a series of layers on paper, meticulously and slowly with water-based layers of pigment. By showing her finished painting alongside the video, Sikander confronted the viewer with two mutually exclusive systems of representation—a static, detailed painting and a moving, time-shifting animation—that depict the same thing. The result is a parallax: two views of the same thing that are fundamentally incompatible. Sikander’s work in several other animations, including Nemesis (2003), Pursuit Curve (2004) and The Last Post (2010) have been inspired by this parallax gap.

When Sikander began studying art in 1987 at the National College of Art in Lahore, Pakistan, she went against the grain of contemporary trends by studying Indo-Persian miniature painting with Bashir Ahmed.

“A challenge for me has been how to make this traditional art form more accessible and contemporary,” Sikander says. “One way is through the use of high-end technology. When I first arrived in Sharjah, I did quite a bit of driving around to get an understanding of the relation of water, heat and light in the region. This gave me the notion of a mirage. I did my drawings with the understanding that a big projection is not just a shift from small to large and with the idea of motion in mind. It made me think differently about my relationship to the drawing. This process was about the invisible become visible, perhaps a metaphor for the mirage too.”

A recurring motif in her animations is the Gopi hair silhouette, emblematic of the female followers of the Hindu god Krishna. In Parallax, thousands of Gopi hair silhouettes behave like cells in a particle system, forming a black curtain that drops down to open the video and then morphing into spouts of oil, flocks of birds, masses of insects and singing, pulsing spheres.

“The hair is separated from the female bodies so just the silhouette remains,” Sikander says. “But I was not interested in simply resurrecting the tradition of the Gopi. The Gopi hair emblem is a very specific and rigid form. To see it transform visually into a fluid and shapeless form is confounding. I did not want to change the stylized forms, but by multiplicity, I could change their nature. They almost function like microbes or grains of sand. As the Gopi curtain descends from top to bottom, it reorganizes itself into a new flocking movement, which plays on the idea of flight, shoaling, foraging, swarming and other herd behavior patterns in nature.”

In a 1960s British Petroleum magazine, Sikander found an image of a multi-valve oil well called a Christmas tree. Parallax ends with multiple Christmas tree wells, made of valves and spools and festooned with red chains, which freeze until they crack and break into millions of pieces that are swept away into infinite digital space. Parallax shatters the illusion of the endless gift of oil.