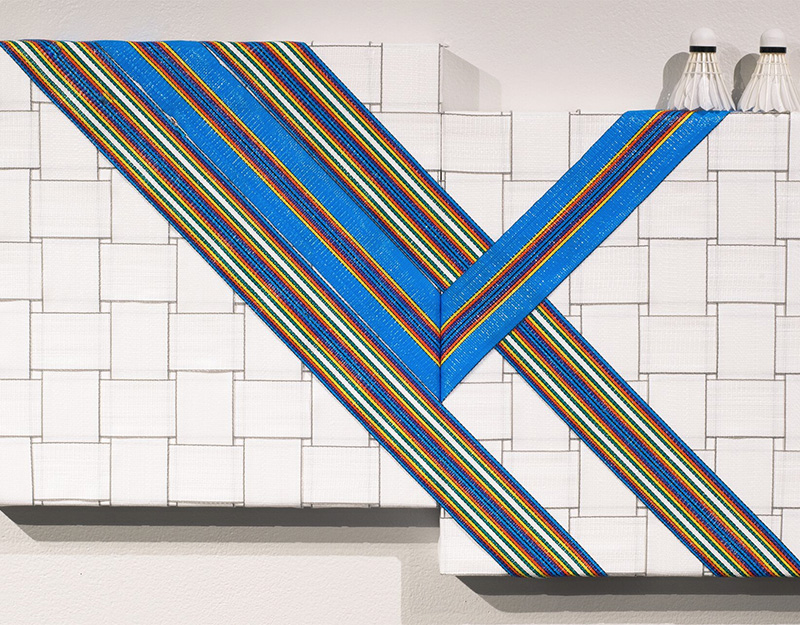 “The gateway drug to art is drawing,” Buster Graybill laughs. He’s talking about his return to that most accessible medium by way of a new installation for Leisurely, his upcoming show at the Galveston Art Center. But instead of a nub of charcoal or a fine tipped pen, Graybill will use exhaust pipe to create “a really large-scale line drawing” up to twenty-four feet long. The exhibition, Oct.13-Nov. 18, will also include works that riff off modernist painting using disassembled vinyl lawn chairs in assorted neon colors. He attributes this newfound interest in color to his wife, Jasmyne, who trained as a painter and will exhibit her atomically-hued sculptures concurrently at the GAC this fall.

The defining characteristic of Graybill’s work isn’t color, however, it’s his use of materials directly drawn from a “rural, working-class perspective.” He’s a formalist outdoorsman. “I invent things that nobody wants,” he explains. Like many artists, he’s found fertile conceptual ground in both the real and imagined boundaries between “high and low culture,” a little crack in the cultural sidewalk in which to grow something weird and wonderful.

Convincing skeptics hasn’t always been easy. A curator once inquired about the materials in Graybill’s “paintings.” When he told her they were lawn chairs she scoffed at “those tacky, ugly things.” It was an offhanded comment, but the anecdote illustrates a point. For many, there is still a bright line between Fine Art and Low Culture. Aware as he is of this distinction, Graybill himself doesn’t espouse it. “I don’t think of it as low culture,” he says. Rather, Graybill coaxes out the underappreciated design in these utilitarian objects, focusing on, for example “the overlapping boundaries between a Frank Stella painting and a lawn chair.” And, like a lot of that famous modernist’s work (although Stella himself might not admit it), Graybill’s art is very fun to look at. Formal play is inherent to a work like Riptide, in which a gnarled chunk of black foam wraps around the center of a bright kayak paddle. Candy colored fishing corks peek out from the foam’s twisted bulk. I dare you not to smile.

Operating out of his garage, Graybill gleans aesthetic materials and inspiration from “the kind of stuff you might load up into the back of a truck” if you were headed to a work or campsite. He comes by it honestly. Graybill grew up in rural Texas and at one time made a living as a house painter. Now he spends much of his day teaching young artists at UTSA, those from a generation often “more used to looking at a tiny little screen,” than the tactile world around them. “I try to engage my students to think about objects in the round. Really kind of understanding three dimensional space, understanding structure helps.” He gives the example of a student who was trying to use a hammer to pound in a drywall screw, a futile and frustrating task. “A lot of people are not used to actually touching objects anymore. I still live in a tangible, tactile world. I think what I’ve found is—once I can get them through that threshold, they get excited.”

Color, surface, line, form and structure are inherent properties in every part of Graybill’s world, and he doesn’t see a need to create these things from whole cloth. A prime motivator for this is sustainability. “One of the reasons I like repurposing…is guilt as a sculptor.  Does the world really need more stuff?”

Finding the novel in the familiar, whether that’s clay pigeons (he recently wrapped a project in Utah where he shot “six or seven hundred of them at white canvases”) or exhaust pipes or black rubber tubes, is slightly uncomfortable for both ends of the “high and low” culture spectrum. In removing art from its rarefied white box, suddenly the only prerequisite for understanding is to have eyes. “People are aware of the multimillion dollar stuff,”  Graybill says, referring to the spectacular auction prices emblazoned across the headlines, “and they’re aware of the stuff they buy.” Incorrectly or not, America has never seen itself as a place of stratified class. What Graybill’s work points out is how clearly we draw these boundaries between high and low, and how fun they are to plow right through.