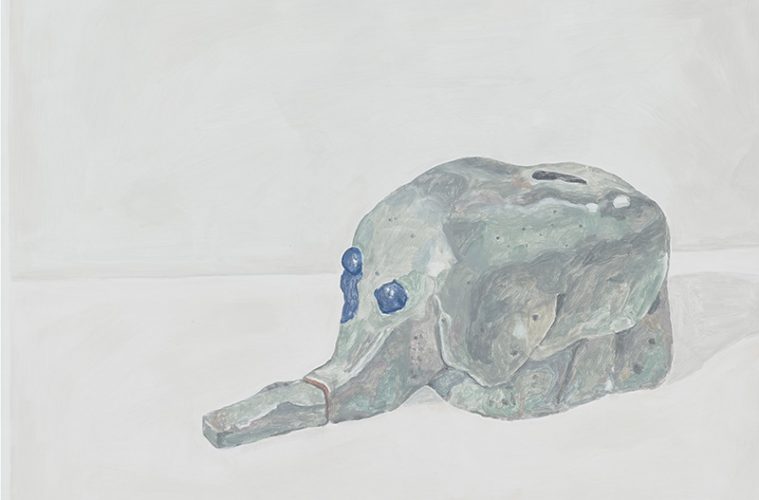 Francesca Fuchs’s subtle alchemy takes place under the bright light of her studio, where shadows aren’t quite banished but rather lifted. Everything from her canvases (arranged evenly against the walls) to the chairs to her milky coffee attains an out-of-time quality in which the summer afternoon blaze disperses into the background. In spite of this airiness, Fuchs’ compositions are sturdy, possessing an insistence that correlates neatly with how the artist describes her own experience. “The older I get the more complicated it gets, but what [I’m] about seems to diffuse.” 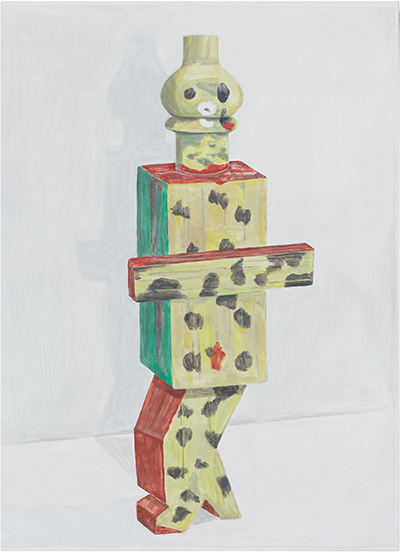 This moment is an important one in Fuchs’s career. Art League Houston has recently dubbed her Texas Artist of the Year, a title about which Fuchs says, “I feel super honored. It speaks to the work, to my presence in the community.” A teacher and sometimes curator, Fuchs is preparing for several exhibitions this fall. The first, at Inman Gallery Sept, 14 through Oct. 27, is a product of her recent MacDowell Colony residency and is called How To Tell the Truth and Painting, and the second, at Art League Sept. 7 through Nov. 3, is titled Something. The titles and the paintings are like Zen koans—you feel the truth of them in the body before the intellect catches up.

Fuchs’ mesmerizing directness as a painter (and interview subject) belies the painstaking nature of her practice. “It’s completely planned to make it look effortless,” she explains while showing me a tiny, foam-core model of Inman gallery hung with proportionally miniscule versions of the paintings she is creating for the show. To execute the kind of perfectly unfussy strokes of the paintings themselves, she has to “make a little sketch, to paint it in the most economical way.”

The smallish works are still-lifes, based on her father’s desk objects. “He died two years ago now. I had this impulse to photograph them,” she says. Each object—a pair of metal scissors, a glass paperweight, a composition book—is painted backlit upon the swirly wood grain of the desk. “The choosing was accidental. This was what was in the box.” The paintings are closely cropped and intimate, but they also possess a strange floating quality, achieved with lighting and Fuchs’ characteristic high-key palette. She describes them as meditations on death, “thinking about departure via the small things.” 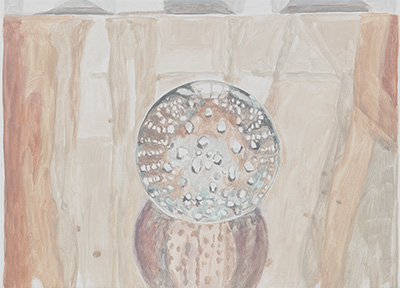 Fuchs has long focused on the so-called small things, saying “the domestic, the home, these objects as signifiers of self and place.” It’s how she poses the bigger questions, often wrapped in the guise of the mundane. “I have a lot of objects. I think most artists have a lot of objects around.” She’s especially interested in memories attached to objects. “Can that weight be felt?” The works for the Something exhibition capitalize on this question, focusing on single, personal items placed in against an unidentifiable neutral background. One is a pair of dancing ducks her granny made. The question for her here is, “How do I address memory without the sentimentality?”

A case study in answering this question may be found at the Glassell School’s current faculty exhibition, where the artist has included two paintings of Christmas trees. “That’s an object you shouldn’t be painting,” she laughs. It just isn’t among the expected vernacular of contemporary art, and yet taken as an opportunity to paint all of the “little abstractions that happen,” the trees shift. Between Fuchs’ efficient brushwork, (“confidence builds over time in your mark-making”) and her precise eye for color, the holiday perennials shed their nostalgic glow and become objects of visual and conceptual complexity. Fuchs has little patience for rose-colored glasses. “I am wary of the word nostalgia,” she explains, “because it has to do with wallowing.”

The words she does use, such as “tenderness” and “joyfulness” as well as her insistence that “it’s the little things that matter,” continue to run counter to certain visions of The Project of Contemporary Art as defined by its institutions. But Fuchs ascribes to the notion that the personal is political and by this standard her work maintains a quiet radicalism. “I do hope they stand in for other people’s objects,” she says, “that they can reach out and affect people.”