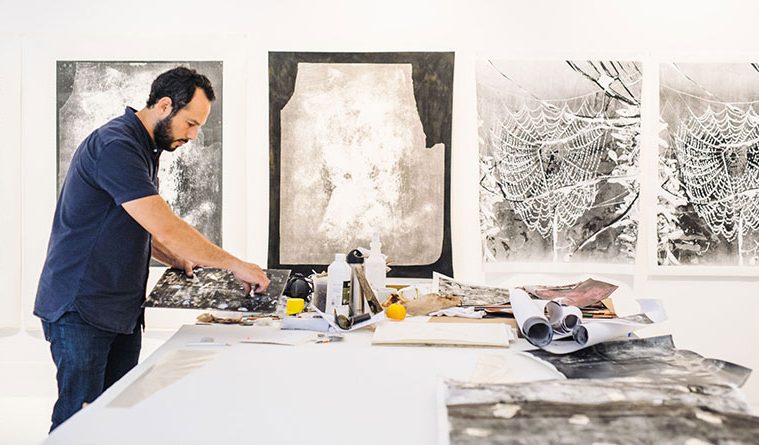 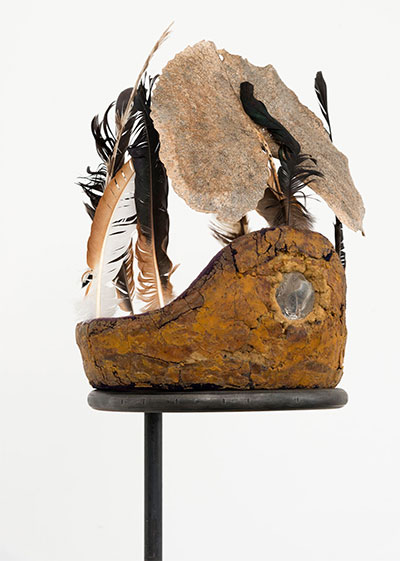 When we meet for coffee, Harold Mendez has just returned to Houston from the Rauschenberg Residency at Captiva Island (FL) via Chicago, where he opened a solo exhibition at Patron Gallery.  His installation at Project Row Houses for Round 45: Local Impact runs Oct. 22 – Feb. 12, 2017. Somehow, he appears rested and revitalized by his travels. We talk about a sense of optimism that he is finding in the studio, and about the deep influence Houston has had on his newest sculptural work, both conceptually and materially.

Since moving to Houston in 2013 for the Core Residency Program at The Museum of Fine Arts, Houston, the Chicago native has called the Third Ward home, finding a surrogate family in the artist community that is centered there. “Having such deep roots in Chicago and being gone from there, I needed to create a community for myself,” he says. “I decided I wanted to live in proximity to PRH because I already had a relationship with them, but also … I wasn’t just living there, I wanted to be part of that community.” Mendez cites artists Jamal Cyrus, Robert Pruitt, Rick Lowe, and curator Ryan Dennis as important influences in his thinking and his artistic process. And, he adds, many of the materials of his recent sculptural work come from the Third Ward neighborhood. “All the materials I’m finding, they have a history embedded in [them] that seems relevant to me.”

In a 2016 sculpture, American Pictures, Mendez includes a found piece of fencing; a tree has grown around the fence, eventually becoming inextricably bound to the metal. “I’ve seen that thing for three years now, and then one day I decided to take it from this abandoned site, a block from my house,” he says. “In that thing, you can see time. It’s a marker of time that’s wrapped around a structure that’s been blighted. There’s something poetic about time attaching itself to a thing that implies a place. The Third Ward, in particular, has that. It’s an important neighborhood for the African American community, but also for artists like myself who aren’t from Houston. There is a necessary community that’s been built by artists to support other artists there, and that’s so meaningful… A lot of people in other cities want to visit PRH and see what’s going on there, because it’s an alternative model. It’s a model that’s not reliant on the commercial art market or the museums to support the artists. The artists are the ones who are offering how they want to be engaged, and they’re authoring what’s important to them.” 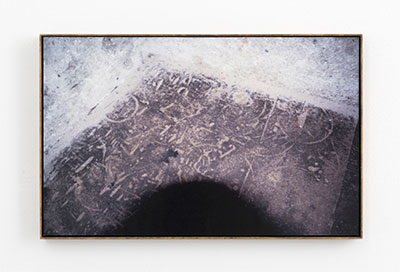 That sculpture, which is currently on view in Mendez’s Chicago exhibition, also serves as a memorial, a marker of the current political climate and recent instances of violence against people of color. In American Pictures, the fence piece stands in a metal grate. There, and surrounding the piece, the artist scatters white carnation petals. “Those sculptures have to be tended to,” he says. “The carnation petals have to be replaced; it has to be looked after… The thing about a memorial, the thing about recalling memories, that’s how you keep a thing alive. Offering these petals is a way to remember.” That kind of remembering, Mendez argues, is also an optimistic gesture.

For his installation, Dayward, at Project Row Houses, Mendez returns to two photographs he took in 1999, while traveling in Ghana. “I’ve never used these images, never shown them, but before I left Chicago and moved to Houston, I grabbed this sleeve of slides,” he says. “I’ve been carrying these things around.” One of the photographs was taken at Elmina Castle, a major stop in the Atlantic slave trade between the 17th and 19th centuries. Almost abstract, Mendez’s Elmina Castle is a photograph of the floor of the building. “You’re looking at my shadow, looking down on the floor, which has all these scratches and marks,” Mendez says. The marks are the subtle evidence of centuries of violence. 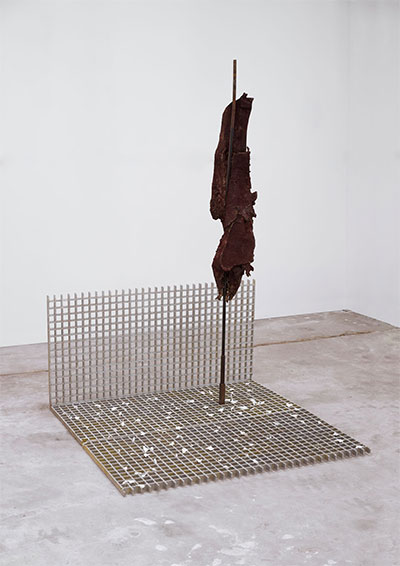 Mendez’s work often deals with materiality and history in complex and meditative ways. He has worked extensively with archival images found in Colombia, transferring them to sheets of metal through a laborious process that creates an object with new textures to its surface. He describes to me how he found a photograph album waiting to be cataloged in an archive in Medellín. Between the pages of photographs, the album had sheets of a protective plastic, embossed with spider webs. Noting his interest in the material, an archivist gave Mendez a few sheets to work with. “It looks topographical, like a map,” Mendez says. “One of the things I’m trying to do is I take an object or a source image and try to translate that into another object. My interest in those archives in Medellin was about conflict, or the ways the life runs parallel to conflict in Colombia. And, that sometimes becomes really abstracted. When I found this torn piece of material, it seemed to mirror some of that abstraction.”

As he reflects on the past few years in Houston, Mendez describes how the city has given him space and focused time to work, how it has been a site for excavating materials and rethinking his process. Somehow, between Colombia and Mexico, Chicago and Captiva Island, Houston has become a hinge point, grounding Mendez’s new work, and simultaneously offering a springboard to other places. He adds, “Houston’s been a place that’s allowed me to slow down and zero in, to be really focused on making and thinking about my practice, and I’ve done that very intentionally.”